The new positions will bring the number of evidence room employees to seven, which will allow the department to staff the room seven days a week, rather than only Monday through Friday. 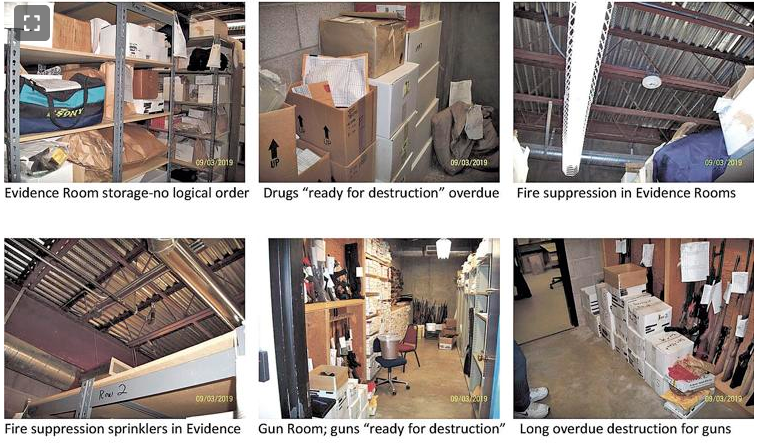 Equipment to revamp the Santa Fe Police Department's outdated evidence room is expected to cost about $467,000, and another $400,000 is needed to pay for four new full-time positions, including a supervisor, officials told the City Council's Public Safety Committee on Tuesday.

In addition, the department estimates it will need $57,000 to hire temporary employees to help purge unnecessary items from the evidence room.

"That's just to get us up to where we need to be," Deputy Police Chief Ben Valdez said.

Recommendations for more staff and technological upgrades to the evidence room were included in a scathing review in January by Washington state-based SCS Northwest Consulting LLC. The report detailed multiple issues with the department's evidence handling policies and procedures.

Funding for the four new evidence room staff members will be covered by reclassifying four unfilled police officer positions, Valdez said. The department has 31 vacant positions, and that number will jump to 32 after an officer retires next week.

The new positions will bring the number of evidence room employees to seven, which will allow the department to staff the room seven days a week, rather than only Monday through Friday.

"It's very challenging for us to have three personnel that support over 143 sworn personnel that submit evidence because it's not just those that collect fingerprints or pictures," Valdez said. "It includes everyone that has a body-worn camera, in-car camera and so on."

Valdez said the high-capacity shelving would allow the department to consolidate the majority of its evidence at one location and allow the agency to hold more items, but it might not be an immediate purchase.

According to a Jan. 28 email from City Manager Jarel LaPan Hill sent to Mayor Alan Webber and the City Council, "additional shelving in the evidence room can be integrated within 1-2 years if funding is not immediately available, but is not the preference."

Her email also said the four additional evidence room staff would cost $285,009, while Valdez put the cost higher, at around $400,000.

The security system would come from Albuquerque-based HEI Inc. and will include interior and exterior cameras, a basement alarm system and other features.

Valdez told members of the Public Safety Committee the police department has chosen to purchase evidence tracking software from Seattle-based EvidenceOnQ because it not only provides bar code tracking capabilities and other modern functions, but its annual maintenance fee of $13,000 was lower than another software company under consideration.

The contracts for the software and security system are scheduled to go before the Public Works Committee on Feb. 24 and the full City Council on Feb. 26.