The charges stem from the December 2016 discovery of evidence in the storage locker found by Cañon City resident Rick Ratzlaff, who purchased the unit. 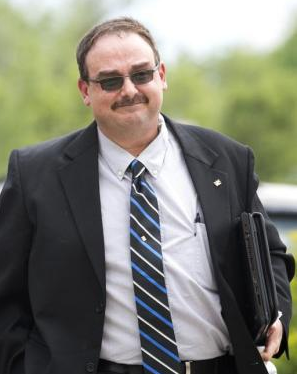 Former Fremont County Sheriff's Office Detective Robert Dodd was found guilty on three of four counts relating to the possession of murder evidence in a personal storage unit by a jury Thursday.

Dodd was found not guilty of criminal possession of an identification document.

He was escorted out of a side door after the verdict and was unavailable for comment.

The charges stem from the December 2016 discovery of evidence in the storage locker found by Cañon City resident Rick Ratzlaff, who purchased the unit. The evidence allegedly is connected to the Aug. 15, 2006, murder of 17-year-old Candace Hiltz in the Copper Gulch area.

Dodd was accused of storing murder evidence in a personal storage locker that later was sold at auction when his payment defaulted. He learned about the sale of the unit on Dec. 25, 2016, and two days later he created a supplement report to the Hiltz murder file listing the items but never mentioned that they had been in his personal belongings.

District Attorney Molly Chilson said during closing arguments Thursday that Dodd had "cooked the books" when he altered reports in the department's computer system.

"He testified it was based on erroneous information and put it in an official report without alerting anyone," she said. "He worked on it for two days."

Dodd's attorney, Randy Jorgensen, said when Dodd created the report, it was based on information that he had confused. He said Dodd never was required to have authorization or permission to create a supplemental report and that all officers had access to the system.

Chilson said that after he was made aware of the discovery, Dodd didn't call the sheriff, but he tried to handle the situation on his own by "covering it up and keeping it a secret."

"That's what he did when he went into the archives and doctored his report and later suggested (the items were) 'trash' and that (evidence custodian) Harry Sharp wouldn't let him enter it in as evidence," she said.

As a ranking detective sergeant responding to a murder scene while wearing a badge, Dodd had a duty to follow the law, Chilson said, basic responsibilities that he knew and understood. By taking an oath as an officer, he could not knowingly "cover his tracks and make up a report with erroneous information."

"If it was logged into evidence, it could have been preserved for evidentiary purposes."

She said what Dodd had done was indistinguishable from theft.

"His stories have changed too many times to even try to prove a motive," she said.

Throughout the trial that began Monday, mention of two possible persons of interest in Candace Hiltz's murder, her brother, James Hiltz, and Heath Hyman, a man with whom Candace's mother had previously been in a relationship, were mentioned several times. However, Chilson made it clear that there was no proof beyond a reasonable doubt to establish that either had killed her, and the men were brought up to establish Dodd's state of mind and what his duties were at the time.

Within two days of the crime, Dodd knew enough information to realize there likely was more than one person who had killed her, and based on descriptions, authorities were on the lookout for James Hiltz and Hyman, both of whom had similar appearances and both were experienced outdoorsmen.

The foot searches after the murder were to "connect the dots" and look for any information related to the crime. Chilson said Dodd collected items showing that Hyman was in the area around the time of the murder, including his Social Security card, which was found in a bag in Dodd's unit and was considered evidence.

Jorgensen said whatever was in the unit was believed to have been Hyman's, including the bag containing the Social Security card that he said was seized by the Division of Wildlife in 2007. When Hyman was released from jail and his property was returned, it was assumed he had been given his Social Security card because "they had found it."

But Lance Gatlin, who was a game warden for DOW in 2007, during testimony Tuesday read a property list, which did not mention a Social Security belonging to Hyman.

Jorgensen said when the card was found in Dodd's unit, Dodd was not aware that it had been there.

"What possible motive would Mr. Dodd have in hauling this crap around for nine years?" he asked. "He could have dumped it and been rid of it, but he didn't."

He said this case comes down to too much time passing and simply "being human."

"This case makes no sense at all — why a career police officer would get so involved in this stuff to ruin his career," he said.

Dodd's actions could be considered careless and negligent, but they were not arbitrary and capricious, Jorgensen said.

"We know that he had 'property, junk, trash' in his possession," he said. "He admitted he screwed up. We're all human — he was a 26-year veteran of law enforcement — he handled cases and protected people in this community every time he went out."

Character witnesses testified during the trail that Dodd was professional and conscientious on the job, however, Chilson argued that he was neither of those regarding this case.

"He should have known better," Jorgensen said. "It was careless and negligent, sure, but it doesn't make a criminal. ... A 26-year good cop — that's all gone now, obviously."

Chilson said Dodd at one point had encouraged the district attorney to file murder charges against James Hiltz with his "hands on this stuff."

"How will anyone ever know what happened to Candace Hiltz?" she asked. "Time's up."