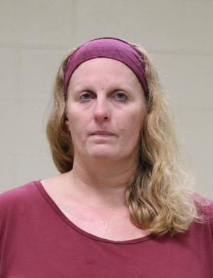 Melinda Sue Severs, 44, of Dumont was granted a deferred judgement with one year of probation for one count of misdemeanor possession of a prescription drug without prescription. She must pay a $315 civil penalty and attend substance abuse treatment. The second count of possession was dismissed.

With a deferred judgement, her record will be expunged upon successful completion of probation and paid fines.

Severs was initially charged in October with two counts of misdemeanor unlawful possession of a prescription drug.

She was the chief's assistant at Mason City Police Department.

Severs is accused of stealing 7.5mg and 5mg hydrocodone tablets from the delivery.

When the bag was inspected ahead of disposal, court documents say the prescription medications were missing.

A search warrant of her office and personal belongings yielded the tablets inside a pill bottle with Severs' name on it, according to Iowa Division of Criminal Investigation charging documents. Investigators say they found the bottle inside her backpack.

The DCI was brought in to assist with the investigation to avoid a conflict of interest, the police department said in a news release.

Severs was put on leave after a criminal investigation began and is no longer employed with the department.

Cerro Gordo County Attorney Carlyle Dalen was listed as the attorney for the state in the case.

The maximum penalty for the charge under Iowa Code is up to one year in jail and a fine between $315 and $1,875.

According to the written plea of guilty, the county attorney agreed to recommend a deferred judgement with one year of probation and a $315 fine.

MASON CITY - A former Mason City Police Department employee received a deferred judgement with no jail time Monday for allegedly taking prescription drugs from disposal at work.
https://globegazette.com/news/local/crime-and-courts/former-mason-city-police-employee-receives-deferred-judgement-in-drug/article_e44d1a4c-14a6-573f-aa26-406fa9ea05f7.html
Tweet
How do you feel about this post?
Happy (0)
Love (0)
Surprised (0)
Sad (0)
Angry (0)
Tags:
drug drop off
Former Sugarcreek officer David Strubel pleads to ...
Fort Oglethorpe police working with company to pro...
Comment for this post has been locked by admin.