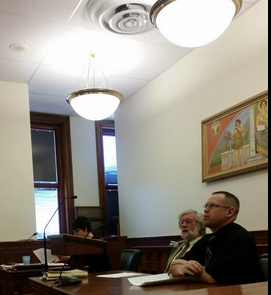 The agreement calls for Strubel to forfeit his state certification as a police officer and spend 30 days in jail.

In exchange for the plea, the Tuscarawas County Prosecutor's Office dismissed a charge of theft in office and reduced a charge of theft of drugs to the misdemeanor theft charge. The agreement calls for Strubel to forfeit his state certification as a police officer and spend 30 days in jail.

The theft charge carries a maximum punishment of 180 days in jail and a $1,000 fine. The original indictment for two felonies carried a potential for 18 months in prison.

Sentencing is scheduled for May 8.

Strubel, of Bolivar, was seen on a police video recording going into locked areas he was not supposed to enter on Sept. 27.

The agreement calls for Strubel to forfeit his state certification as a police officer and spend 30 days in jail.
https://www.timesreporter.com/news/20190327/former-sugarcreek-officer-david-strubel-pleads-to-midemeanor-in-drug-theft
Tweet
How do you feel about this post?
Happy (1)
Love (0)
Surprised (0)
Sad (0)
Angry (0)
Tags:
seen on a police video recording
Jewelry returned to owner after sitting in Laurens...
Former Mason City police employee receives deferre...
Comment for this post has been locked by admin.