A former RCMP officer accused of stealing 10 kilograms of cocaine from a
police exhibit locker in Halifax has been committed to stand trial on a
half-dozen charges. 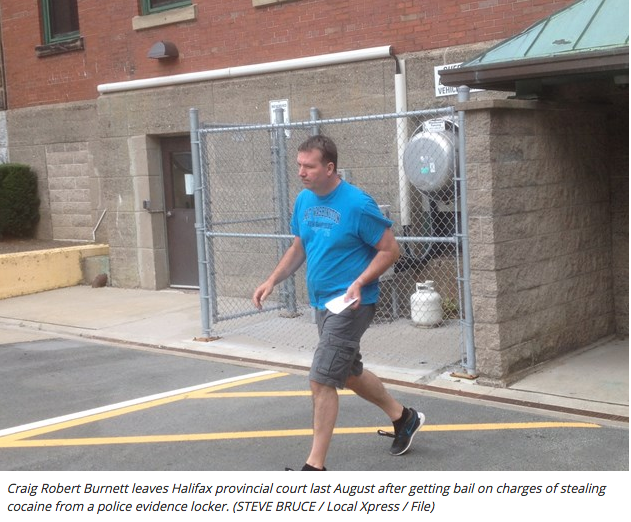 A former RCMP officer accused of stealing 10 kilograms of cocaine from a police exhibit locker in Halifax has been committed to stand trial on a half-dozen charges.

A preliminary inquiry for Craig Robert Burnett got underway last month in Halifax provincial court and wrapped up Wednesday.

Burnett, 49, was arrested last August at his home in Elmsdale on four charges: theft over $5,000, breach of trust, trafficking cocaine and laundering proceeds of crime.

In February, the province's Serious Incident Response Team added charges of obstructing police and fabricating evidence. The preliminary inquiry sat for a total of six days in provincial court, with Judge Anne Derrick sending the matter on to trial in Nova Scotia Supreme Court.The evidence from the hearing is banned from publication.

Burnett's lawyer, David Bright, will appear in Supreme Court in Halifax in late July to begin the process of setting dates for a judge-alone trial.

Burnett remains free on bail. He was required to deposit his passport with police and must check in with the RCMP headquarters in Dartmouth every Monday in person or by phone.

He also is prohibited from possessing firearms, being within 50 metres of two addresses in the Musquodoboit Harbour area and having contact with Michael Kanasevich and Scott Rowlings, two alleged accomplices who are Crown witnesses.

Burnett was a staff sergeant at the RCMP's operational communications centre in Truro at the time of his arrest. He was suspended with pay and then retired after 25 years with the police force.He was a sergeant with the RCMP's national ports enforcement team in Halifax in 2011 when he allegedly took the drugs from a larger shipment that had been seized and replaced them with another substance.

Rowlings and Kanasevich allegedly ensured the drugs were sold, with the officer receiving a share of the money.

RCMP contacted SIRT in September 2015 after receiving information about Burnett's alleged actions. Under the guidance of SIRT director Ron MacDonald, an 11-month investigation was conducted by RCMP officers from five provinces.