Hunter was first arrested more than one year ago – in July 2015 – suspected
of smuggling numerous guns out the department's evidence room and
selling them. He was out on bond from state charges that stemmed from
that arrest. 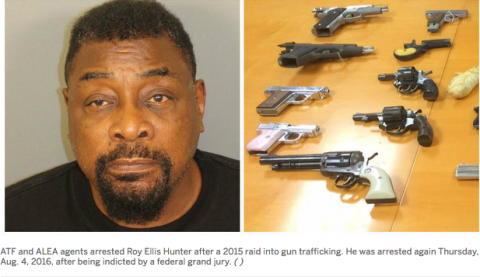 ATF and ALEA agents arrested Roy Ellis Hunter after a 2015 raid into gun trafficking. He was arrested again Thursday, Aug. 4, 2016, after being indicted by a federal grand jury. ( ) Print Email By Carol Robinson | Email the author | Follow on Twitter on August 05, 2016 at 3:24 PM, updated August 05, 2016 at 3:31 PM A former Fairfield Police Department custodian is under arrest after a grand jury indicted him on federal gun charges. The U.S. Attorney's Office in Birmingham, along with the bureau of Alcohol, Tobacco, Firearms and Explosives today announced the arrest of 70-year-old Roy Ellis Hunter. He is charged with being a convicted felon in possession of nearly 50 weapons, mostly handguns. He was indicted July 26, but the indictment was unsealed after his Thursday arrest. Hunter was first arrested more than one year ago – in July 2015 – suspected of smuggling numerous guns out the department's evidence room and selling them. He was out on bond from state charges that stemmed from that arrest.

The 2015 raid at his home at that time culminated a lengthy investigation into gun trafficking, Dave Hyche, ATF's assistant special agent in charge in Alabama, said at the time. The probe focused on suspected criminals selling to people who are prohibited from having them.

Hunter is a convicted felon who spent time in federal prison on racketeering charges connected to a drug trafficking operation. He was also a member of the Outcast Motorcycle Club.

According to the federal indictment, Hunter was convicted on federal racketeering and cocaine distribution in 1984 and on federal counterfeiting charges in 1983. Count one of the indictment charges him with being a convicted felon in possession of four handguns on June 4, 2015. Count two charges him as a convicted felon in possession of 42 firearms – 39 handguns, one rifle, one shotgun and a trigger group – on July 8, 2015.

The indictment seeks to have Hunter forfeit those 46 firearms, plus five others. "Taking a convicted felon in control of a cache of firearms off the streets is the kind of law enforcement work that greatly reduces the threat of violence in our communities,'' Vance said in a prepared statement. "We should all appreciate the collaborative work of ATF and ALEA agents in investigating this case and bringing it forward for prosecution."

"Putting a stop to this flow of confiscated firearms into the community, no doubt, has had an effect on crime in the area,'' said Hyche, also in a prepared statement. "Firearms that had been used in crimes and recovered by police getting back into the hands of a convicted felon who was selling them had to be stopped as fast as possible."

"Stolen firearms in the hands of violent criminals are an enormous problem for us in Alabama and nationally,'' Hyche said, "so we aggressively work these cases with our law enforcement partners."

Hunter was arraigned today in federal court and released on bond. The maximum penalty for the charge of felon in possession of a firearm is 10 years in prison and a $250,000 fine.