The findagrave.com site lists his grave as being in West Beech Cemetery in the Alliance area. 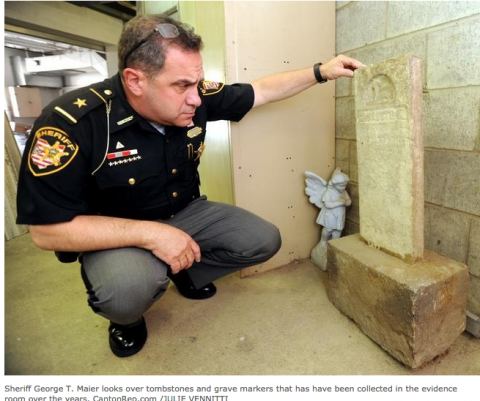 CANTON Harry McDonough was born in 1898, served during World War I and died in 1953, a year after the Canton city directory listed him as an employee at U.S. Steel.Clarence O. Oswalt was just about a year old when he passed in 1911.

The gravestones for both rest in the evidence locker at the Stark County Sheriff's Office on U.S. Rt. 62, and Sheriff George T. Maier hopes to reunite the stones with the appropriate graves.

Maier is asking for anyone who knows where those headstones, grave markers and cemetery statues belong to notify his evidence technician, Deputy Mike Spivey.The markings on McDonough's headstone are mostly visible, including part of his name and the words "WW1 Pvt 18 Co MTC," indicating that he served as a private in the 18th Co. of the U.S. Army's motor transport corps.

The dates of his death match those on Stark County Probate Court records, and his birth and death dates match the grave marker on a www.findagrave.com page for him. That grave is located in the Forest Hill Cemetery in Canton, according to the website.The baby's headstone simply reads Clarence O. Oswalt 1910-1911.

The findagrave.com site lists his grave as being in West Beech Cemetery in the Alliance area. The Daughters of the American Revolution restores patriot gravesites and historical memorials, according to the organization's website.A spokesperson for the DAR headquarters in Washington, D.C., took a message for a local chapter member, but no one from that chapter returned the call.Not every headstone in Maier's evidence room belonged to a deceased military man, and not every headstone may have belonged to a local resident. The findagrave website shows the cemetery for a headstone that reads only "Loren H. Cummings" belongs to an Iowa decedent.

Another stone simply says "Father," another only says "Frank" and yet another appears to have Hebrew lettering.While the headstones and grave markers may have long since been replaced at the cemeteries from which they were stolen, Spivey needs to know. He wants to determine whether they need returned to their respective graves or whether the sheriff's department must arrange to dispose of them.

As of last week, 10 headstones and grave markers were in the evidence room along with two statues, at least one of which may have stood overlooking a child's grave.They had been found over the years as long ago as 1986 and in various locations, including Stark County residents' yards.