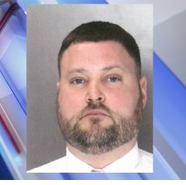 Scott Flowers, 39, of Harrisburg, has been charged with four counts each of criminal trespass, forgery, tampering with physical evidence, possession of a controlled substance, and five counts of theft by unlawful taking. The charges stem from a January 2018 incident, in which the Lower Swatara Township Police Department reported to the Dauphin County District Attourney's Office that money had been stolen from one of their detectives at the police station, and asked the Criminal Investigation Division of the DA's Office to conduct the investigation, with LSTPD pledging their full cooperation.

The CID and the LSTPD then conducted an audit of the evidence locker at the police station, and found that four evidence envelopes had been opened and resealed with the submitting officer's signature traced over. The envelopes were each missing less than 10 dosage units of heroin, morphine, and oxycodone. The CID investigation determined that Flowers, who was an officer with the LSTPD at the time, had allegedly been the one accessing the evidence locker without authorization.

According to the Dauphin County District Attourney's Office, in the probable cause affidavit filed in this case, Flowers allegedly admitted to detectives that he stole and used the substances. Flowers was immediatley suspended by the Lower Swatara Township Police Department, and then Flowers resigned.

A Release from the DA's Office states that the charges are mere allegations at this time, and Flowers is presumed innocent.