Arao is accused of obtaining the guns by transferring "off-roster" inventory from Ronin Tactical Group to himself, while Fernandez allegedly sold dozens of "off-roster" firearms through private-party transfers. "Off-roster" guns are those that can be legally bought by law enforcement officers but are not available to the general public. 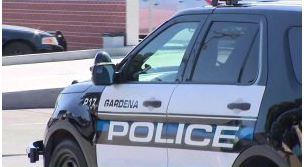 The scheme involved an account run by Carlos Miguel Fernandez, 42, through which both he and Edward Yasushiro Arao, 47, resold guns not available to the general public, and did so without a license, the U.S. Attorney's Office for the Central District of California said in a new release. A five-count indictment detailing the accusations was unsealed Friday, officials said.

Both men have been employed with Gardena police for 17 years and were placed on administrative leave once the charges were announced, the department confirmed.

Fernandez is accused of running the Instagram page and largely using it to advertise the guns being put up for sale by himself, Arao and others. The pair also used the account to negotiate the prices and terms of the deals and receive payments, according to the indictment.

Arao was CEO of a company that held a federal firearms license called Ronin Tactical Group, but neither he nor Fernandez was licensed to deal guns when the sales alleged in the indictment took place, officials said. In addition to using the Instagram account, both allegedly unlawfully marketed at gun shows as well.

Arao is accused of obtaining the guns by transferring "off-roster" inventory from Ronin Tactical Group to himself, while Fernandez allegedly sold dozens of "off-roster" firearms through private-party transfers. "Off-roster" guns are those that can be legally bought by law enforcement officers but are not available to the general public.

The indictment was unsealed after others who purchased weapons from the officers were charged in the case. Salinas residents Oscar Morales Camacho Sr., 63, and his 34-year-old son Oscar Maravilla Camacho Jr. stand accused of participating in a "straw purchase" transaction to buy a firearm through Fernandez.

The elder Camacho falsely said he was buying a gun from himself, when really he was buying it for his son, who has a criminal conviction prohibiting him from owning a gun, investigators said. According to the indictment, Fernandez "well knew" that the gun was for Camacho Jr.

Both Camachos have pleaded not guilty to their charges and are expected to stand trial on May 31, officials said.

The officers were involved in at least one other "straw purchase," the indictment alleges. Bianca Elizabeth Ibarria, a 23-year-old resident of South Los Angeles, allegedly bought two guns for her boyfriend, 24-year-old Adalberto de Jesus Vasquez Pelayo Jr., and both have been charged with making a false statement in a federal firearm licensee's records during a transaction. The couple is expected to be arraigned April 3.

Fernandez and Arao are also expected to stand for arraignment on April 3.

If convicted as charged, Norwalk resident Fernandez could face a maximum of 15 years in federal prison, while Arao, of Eastvale, could face up to 10 years, officials said.

The Bureau of Alcohol, Tobacco, Firearms and Explosives has been leading the investigation, and the Gardena Police Department is fully cooperating, the DOJ said.

"This type of conduct is inconsistent with our organizational values and the ethics of our profession and will not be tolerated by the Gardena Police Department," Medrano said. "We are cooperating fully with the ATF."