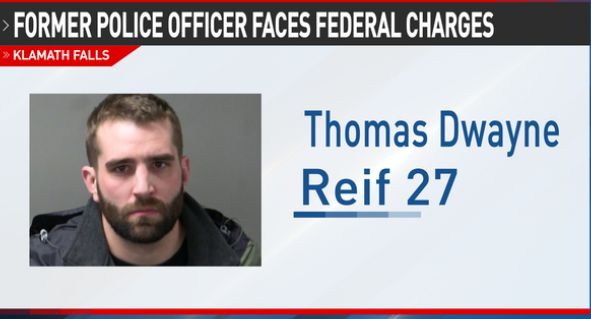 Klamath County, Ore. — A former Klamath Falls Police Officer is facing federal charges for stealing methamphetamine and fentanyl from the Klamath Falls Police Department's evidence room. The charges stemming from a Nov. 2020 on-duty crash in which he was allegedly driving under the influence of fentanyl.

According to a press release from the U.S. Department of Justice, the two-count indictment was unsealed today which states 27-year-old Thomas Dwayne Reif has been charged with two counts of possessing a controlled substance by misrepresentation, fraud, forgery, deception, or subterfuge.

Shortly thereafter, Reif overdosed while operating his police car. The car jumped a median, traveled into oncoming traffic, and caused a multiple-vehicle accident. Reif was rushed to the hospital and successfully revived by medical personnel. Toxicology reports showed that Reif was under the influence of substances including methamphetamine and fentanyl.

Investigators searched the personal locker assigned to Reif at the Klamath Falls Police Department. Inside the locker, investigators found that Reif had concealed an evidence bag containing methamphetamine.

Reif made his initial appearance in federal court today before a U.S. Magistrate Judge. He was arraigned, pleaded not guilty, and released pending a jury trial scheduled to begin on Aug. 3, 2021.

If convicted, Reif faces a maximum sentence of four years in federal prison, one year of supervised release, and a fine of $250,000.

Acting U.S. Attorney Scott Erik Asphaug of the District of Oregon made the announcement.

This case was investigated by the Federal Bureau of Investigation with Oregon State Police and is being prosecuted by John C. Brassell, Assistant U.S. Attorney for the District of Oregon. Klamath Falls Police Department cooperated and provided assistance throughout the investigation.

A former Klamath Falls Police Officer is facing federal charges for stealing methamphetamine and fentanyl from theKlamath Falls Police Department&rsquo;s evidence room. The charges stemming from a Nov. 2020 on-duty crash in which he was allegedly driving under the influence of fentanyl. According to a press release from the U. S.
https://www.kcby.com/news/local/former-klamath-falls-police-officer-charged-with-stealing-drugs-from-evidence-room
Tweet
How do you feel about this post?
Happy (0)
Love (0)
Surprised (0)
Sad (0)
Angry (0)
Tags:
West Coast evidence locker evidence room officer federal charges meth
Hot potato: Who will accept the keys to Pound’s po...
Va. town votes to fire ‘every officer in its polic...