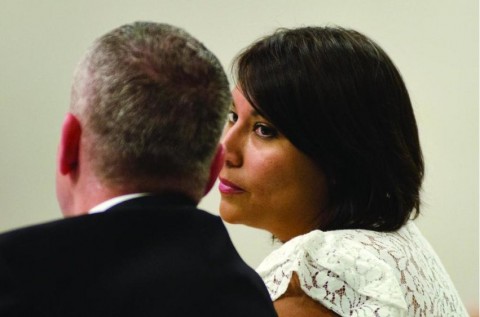 She resigned May 27, 10 days after her arrest.Prosecutors say she stole $1,741 and used some of it to pay utility bills, according to Whiteside County Court records and testimony during a May 19 hearing.

She is free on $20,000 bond.Jaramillo was the lead investigator in the Dec. 6 death of Paul Rodney Depotter, 27, of Rock Falls, who died of a fatal heroin overdose. According to police documents sent to Sauk Valley Media by his mother, Penny Depotter, 46, of Dixon, $1,741 was found on Depotter's body in his Rock Falls apartment that day and entered into evidence.Her son's money was part of a $2,500 inheritance he received a few days before. Depotter asked to get it back to pay for the funeral, but her request was denied, she has said.In her report, Jaramillo wrote that it was brought to her attention that Depotter wanted the money to pay for funeral expenses, but the money would have to stay in evidence until legal documentation was received allowing its release to an appropriate family member.

"My trust in the law is broken," said Depotter, who watched Jaramillo in court Monday as she entered her plea. "[I'm] hurt. Mad. So much in my heart. Today is 6 months that I lost Rodney – they failed me in so many ways."Because all Whiteside County judges have recused themselves, Rock Island County Associate Judge Theodore G. Kutsunis is presiding.

Illinois Assistant Attorney General John Kezdy has taken over as special prosecutor.Bond conditions were modified Monday to permit Jaramillo to work at a tavern or restaurant that serves alcohol. The judge emphasized that she is not allowed to consume it, and must not "visit or socialize" unless she is there to work.​The next hearing is Aug. 24.