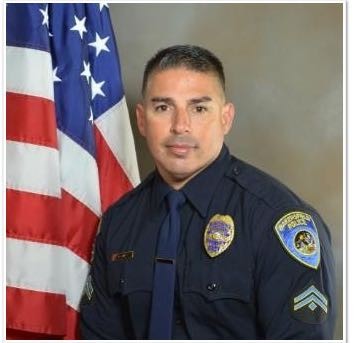 Diaz admits to seizing some 10 pounds of meth as evidence and returning approximately one pound of it to the department. He admits that he and
his criminal partner unlawfully converted the nine pounds of meth to their possession, which they later sold for profit.

Damacio Diaz, a 17-year veteran of the Bakersfield Police Department, whose exploits as a high school cross country athlete were highlighted in the Disney film "McFarland, USA," has admitted to corruption, large-scale narcotics activities, tipping off a criminal associate to police investigations and stealing drugs seized as evidence — as part of a plea agreement filed Thursday in federal court.

And in a separate and searing revelation, Diaz's attorney, David Torres, told The Californian that several additional officers in the department are under investigation and that he expects a number will soon be indicted on federal charges.

"These are very serious charges," Torres said of the crimes his client has admitted to. "But my client is the first to come forward and cooperate with law enforcement.

"The reality here is that he is aware that he has betrayed the public trust," Torres said.

Torres said Diaz is helping the FBI, DEA and other agencies root out rampant corruption among some members of the BPD.

"He sees this as an opportunity to expose corruption within the Bakersfield Police Department, and certainly the narcotics unit," Torres said. "Officers are ripping off narcotics, selling narcotics to drug dealers. These officers are taking advantage of the profit in drug dealing."

"A number of officers will soon be indicted," Torres said. "The corruption involved will read like a fiction novel. But this is no fiction novel. It is happening right here in Kern County." He said his client believes that oversight in the department is seriously lacking. And that must be corrected. "That is his position," Torres said of Diaz. He also stressed that the majority of officers in the department are honest, and are out there every day doing their job. Torres said he isn't privy to when these indictments will be handed down. "That is up to the assistant U.S. attorney," he said. The longtime local attorney also said it's difficult to predict the amount of time his client will serve in prison.

Diaz was arrested by federal agents at BPD headquarters on Nov. 20. He was released from custody the day of his arrest on a promise to obtain a $200,000 property bond, secured by equity in property owned by his parents, Paul and Juanita Diaz. According to the terms of Diaz's plea deal, the former BPD detective will plead guilty to federal programs bribery, possession and attempted possession with the intent to distribute methamphetamine, and making and subscribing a false income tax return.

"Diaz also agrees that he is in fact guilty of these charges and that the facts set forth in the factual basis for plea ... is accurate," the agreement states. The factual basis for plea, essentially a public admission of the commission of multiple crimes, asserts that Diaz — while employed as a police officer — worked with a criminal informant by the name of Guillermo Magallanes, that he was aware that Magallanes was involved in the large-scale sale of meth, that he received cash bribes from Magallanes in return for providing Magallanes with intelligence on law enforcement practices and activities and protecting Magallanes from search, arrest and prosecution.

And there's more. Much more. Diaz admits to seizing some 10 pounds of meth as evidence and returning approximately one pound of it to the department. He admits that he and his criminal partner unlawfully converted the nine pounds of meth to their possession, which they later sold for profit. According to the plea agreement, Diaz "agrees he will be remanded into custody upon the entry of his plea." He must cooperate fully with the government and other law enforcement agencies, and his Toyota Sequoia SUV, his spacious country home in northern Kern County, and $49,000 seized from his bank account may be subject to asset forfeiture. In exchange, the government will recommend that Diaz be sentenced to the low end of the sentencing guidelines for his offenses. However, according to the deal, the court is under no obligation to accept the recommendations made by the government.

The maximum sentence for the bribery count is 10 years in prison and a fine of $250,000. However, the maximum sentence for possession with intent to distribute methamphetamine is life imprisonment. Diaz, 44, had been on paid administrative leave beginning Feb. 26, 2015, and he continued on that status for a year.

Diaz resigned from the department on Feb. 24 of this year, according to a BPD spokesman. Diaz's newly built home is located in what is described as "prestigious gated Famoso Hills Estates" in rural northern Kern County. The home boasts nearly 4,000 square feet of living space, including four bedrooms and three full baths, according to documents from the Kern County Assessor's Office. The land value alone — 20 acres of it — was assessed at more than $98,000. According to realtor.com, a single-family home located just up the street from the Diaz place, larger by 800 square feet, sold for $800,000 in 2014. The purchase of a large custom home by a couple earning the salary of a detective and a teacher may very well have raised a red flag for the FBI, the DEA and the IRS, all of whom were involved in a joint investigation of Diaz's activities in recent years.

Not counting benefits or overtime pay, Diaz earned a base salary of about $83,000 a year, according to the City of Bakersfield. Bakersfield City Councilman Terry Maxwell, stressing he hadn't seen the details of the plea agreement, said the outcome of Diaz'a prosecution is probably a good thing if it both serves justice and saves taxpayers the cost of a trial. "It's awful someone in this kind of position of trust would be pulling this," Maxwell said of Diaz. "Hopefully the ultimate outcome is that any officer in the same position would never do it." Columnists Lois Henry LOIS HENRY: Toes are getting sensitive as groundwater turf is set Herb Benham HERB BENHAM: Keeping a cool head when A/C goes out Richard Beene Bakersfield Observed: A blog for and about Bakersfield life, media, politics and people