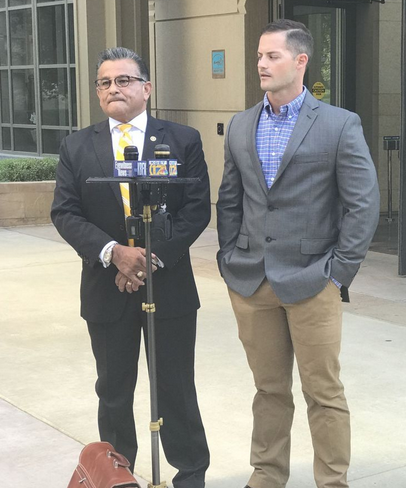 FRESNO — Two former Kern County sheriff's deputies, Logan August and Derrick Penney, who conspired with another law enforcement officer to sell drugs they stole from evidence lockers, were sentenced here Monday morning to probation. They will do no prison time.

The disgraced officers, who both admitted to besmirching the badge and betraying their fellow officers, their families and the community, had faced maximum sentences of five years.

But in an extraordinary and tearful sentencing hearing presided over by U.S. District Court Judge Lawrence O'Neill, the two officers were spared prison time by the judge, who was clearly moved by the defendants' remorse, their decision to voluntarily confess everything to investigators, the pain the families have already suffered, and the unwavering support the two wives have given their husbands.

"Being the wife of a law enforcement officer is not easy," the judge told Tiffany August and Callie Penney after asking both women to stand.

"Being the wife of a fallen law enforcement officer is even more difficult."

O'Neill went on to acknowledge that the wives had taken "the brunt," maybe the largest share, of the suffering meted out by the acts of their husbands.

"The two of you have been incredible not to have gotten into the U-Haul and taken off," he said. "The both of you should be proud."

Federal prosecutors had recommended a nine-month prison term for August, who was seen as more deeply involved than Penney.

In a sentencing memorandum filed last month, prosecutors said a nine-month term was appropriate for August in part "because the need to deter police corruption of this kind is of paramount importance."

Prosecutors said August used his position as a deputy to steal marijuana that would have been destroyed and instead helped spread it into the community.

"Defendant's actions were motivated by greed, and he committed these crimes repeatedly over a nine-month period," prosecutors said. "His conduct has tarnished the reputation of the KCSO."

Prosecutors recommended probation for Penney, noting there was no evidence of his criminal activity beyond his one-time theft of marijuana from the storage unit. Penney was the first to go to authorities and helped convince August and former Bakersfield Police Department Detective Patrick Mara to join him in coming clean.

During Monday's hearing, August's "little sister," Stormy August, now 21 — 10 years younger than her brother — told the court that Logan "saved me and my little sister from a very rough childhood."

In fact, August and his wife, Tiffany, brought the younger siblings home to live with them when August was still in the sheriff's academy and the young couple had a 1-year-old baby to care for.

"My husband and I have known each other since the fourth grade," Tiffany told the judge.

After he joined the KCSO, her husband threw himself into his work, Tiffany August said.

"He likes to conquer," she said. "He would work every overtime, every holiday for years."

But she noticed a change in him after he joined the narcotics team.

"I didn't know the burden he was carrying."

Both women broke into tears during their statements, as did August himself, as he apologized to his friend, Penney, his family, his fellow officers and the community as a whole.

He told O'Neill he was aware the judge once worked in law enforcement, and he apologized to him as well.

Penney was less effusive, and while he apologized for breaking his oath to uphold the law and protect the community, he didn't ask family members to speak on his behalf.

In an extraordinary glimpse into his thought process, Judge O'Neill told August he was leaning heavily toward giving him prison time.

"I also know the vast majority do not succumb to temptation and do not go in the wrong direction," the judge said.

But even as he pointed out the deputies' failures, he seemed ready to give them a break. Although he did require August to perform 1,500 hours of community service, and Penney to perform 250.

"The inference I draw is you woke up," O'Neill said.

Unlike the two BPD officers who faced more serious charges, August and Penney will not see a jail cell.

Mara and his former BPD partner, Damacio Diaz, are currently serving five-year sentences in federal prison for stealing methamphetamine and putting it back on the streets for profit.

All four former cops have admitted to their crimes.

According to the plea agreements, August and Penney stole marijuana from the sheriff's storage unit that had been previously confiscated from illegal grow operations.

"On or about September 19, 2014, in furtherance of this conspiracy, Penney and KCSO Deputy August used their KCSO-issued keys to gain access" to the department's marijuana storage unit, the agreements state.

The two admitted to cutting the tops off plants and placing them in trash bags, storing the pot at Penney's home until another co-conspirator retrieved it. That person trimmed the plants into usable cannabis.

About eight pounds of saleable pot was then returned on multiple occasions to Penney, according to the documents. He then delivered the product, over a period of time, to August, who provided it to an individual who had previously worked for him as a confidential informant.

That person sold the weed and shared the profits with August, who then shared the money with Penney.