An audit later determined that approximately $70,000 was missing, according to Healey's office 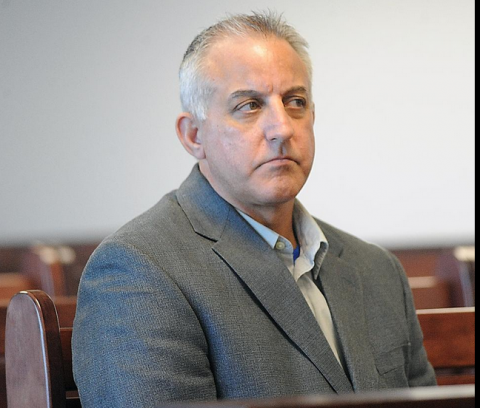 RAMINGHAM — A veteran police officer who supervised the department's evidence room admitted in 2015 to stealing money under his care, according to new records filed in court Wednesday.

Former patrolman Alan Dubeshter allegedly told several colleagues he took money entrusted to him without authorization. State prosecutors say the admission came after police discovered envelopes from the evidence room inside Dubeshter's truck, tipping them off to the thefts.

Dubeshter was arraigned Wednesday on felony charges of larceny over $250 and using his position to secure an unwarranted privilege for himself. He pleaded not guilty and was released on personal recognizance.

While officials from Attorney General Maura Healey's office have declined to discuss the case, a statement filed in court Wednesday sheds new light on their investigation.

Prosecutors say the envelopes — typically used to store cash seized in criminal cases — were found in Dubeshter's truck on Sept. 18, 2015. Investigators determined the envelopes had been "tampered with," and that currency was missing.

Soon after, they discovered that envelopes in the evidence room had been tampered with in the same way, allowing the contents to be stolen.

An audit later determined that approximately $70,000 was missing, according to Healey's office.

Dubeshter was placed on leave Sept. 21, 2015 and resigned seven months later. A grand jury seated in Suffolk County then returned two indictments against him in January 2017.

Dubeshter waived his right to hear the indictments read aloud in court Wednesday. He was certified by probation officials as an indigent defendant, allowing him to qualify for a court-appointed lawyer.

Clerk Magistrate Matthew Day ordered Dubeshter to have no contact with potential witnesses while the case is pending, with the exception of his wife. His lawyer, Michael Kelly, is next due to appear in court April 18 to represent Dubeshter at a scheduling conference.

Kelly emerged from the courtroom carrying a cardboard box filled with discovery material produced by the state. Prosecutors also handed over a compact disc containing digital records related to their investigation.

Kelly declined to discuss the case, saying he is not yet familiar with the full circumstances.

"There's a lot of discovery that has to be gone through at this point in time," Kelly said.

Dubeshter also declined to comment on the allegations, saying his lawyer advised him not to speak about the case.

Dubeshter, a 30-year veteran of the department, was previously in charge of receiving, cataloging and maintaining evidence in criminal cases, as well as delivering evidence to various state labs for testing and destroying evidence from closed cases, according to town records.

News of the evidence room thefts surfaced publicly in December 2015 after an internal email from the police chief was leaked to a local television station. In the Nov. 30, 2015 message — obtained by the Daily News through a previous records request — Chief Kenneth Ferguson wrote that "some officers" had been subpoenaed to testify before a grand jury, which was due to convene that week. The chief wrote that he expected "considerable media attention if and when an indictment is returned."

Ferguson then publicly acknowledged the investigation in December, but declined to name any officers involved. The chief also declined to discuss how much money was missing or when the investigation might be completed. The department rejected requests from the Daily News to release the findings of audits conducted of the evidence room in November 2015, citing the ongoing investigation.

Speaking after the indictments were returned earlier this year, Acting Police Chief Steven Trask said the department has implemented numerous recommendations to improve control of the evidence room, including having at least two officers supervise the area. Police also began depositing cash seized during investigations into a bank account rather than storing it in the evidence room.

"We've taken steps to make sure nothing like this ever happens again," Trask said.

FRAMINGHAM — A veteran police officer who supervised the department’s evidence room admitted in 2015 to stealing money under his care, according to new records filed in court Wednesday.Former patrolman Alan Dubeshter allegedly told several colleagues he took money entrusted to him without authorization. State prosecutors say the admission came after police discovered envelopes from the evidence room inside Dubeshter’s truck, tipping them off to the thefts.Dubeshter was
http://www.metrowestdailynews.com/news/20170301/framingham-officer-admitted-to-stealing-money-state-says
Tweet
How do you feel about this post?
Happy (0)
Love (0)
Surprised (0)
Sad (0)
Angry (0)
Tags:
altered evidence assault  kits Chain of Custody Big Three:
Tens of thousands of dollars, several kilograms of...
Man charged with murder after DNA links him to 199...
Comment for this post has been locked by admin.