Of the 12,000 items in drug-related police evidence almost a quarter were missing, but Halifax police Chief Jean-Michel Blais says nothing 'untoward' happened. 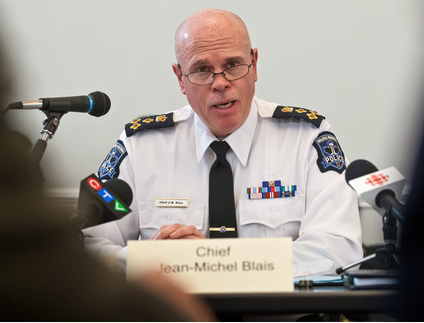 By: Zane Woodford Metro Published on Mon Feb 27 2017 Tens of thousands of dollars and several kilograms of illicit drugs are still missing from Halifax Regional Police evidence, but the chief says there's no indication anything "untoward" has happened within his force.

Chief Jean-Michel Blais presented an update on the Drug Exhibit Audit to Monday's meeting of the municipality's Board of Police Commissioners, and outlined the preliminary results of a full inventory, conducted between September 2016 and February 2017, of all 12,792 drug-related exhibits in the police database.

Police were originally unable to physically find 3,000 of those exhibits, including $98,999.49 in Canadian currency.

Blais didn't know how many of the 3,000 had been found, but spokesperson Theresa Rath Spicer said later Monday police have accounted for 140 of them, making up $72,464.57 of the Canadian currency. Among the items still outstanding is $26,534.92 in Canadian currency, more than eight kilograms of marijuana, 1,540 marijuana plants, three kilograms of hashish, more than a kilogram of cocaine and an 80,000-volt stun gun. Blais highlighted the fact that no firearms were ever missing.

The evidence issues affected one court case: one charge was dropped against someone facing "numerous charges." "We're very confident that our officers did not do anything untoward," Blais told reporters after the meeting. "What we are looking at and what we have determined is that there are some gaps in our process, in our policy, in the way that we've done things."

Blais attributed the problems to the amalgamation of Halifax, Dartmouth and Bedford police forces in 1996, and the implementation of a new records-management system in 2005. Blais said police have made significant improvements to their processes since this came to light, implementing 23 of 34 recommendations made after the original audit.

The other 11 are in progress. The board and regional council also tentatively approved a new position for the police as part of their 2017 budget, a new evidence custodian, which Blais said will help finish the audit and better organize the evidence. "We want to maintain the confidence of the public and we will work very hard to do that," Blais said.

"My full expectation is that every day that goes by, there are more exhibits, not just money, that are bring reconciled." Board chair and Deputy Mayor Steve Craig asked Blais during the meeting how long it would take police to complete the full audit. Blais said he didn't expect it to be done this coming year, but within the next few years. He couldn't provide an exact timeline.

"What I'd hoped for though, is a little bit more certainty on when we were going to be finished this audit and how we're going to move forward in the future," Craig said. Though Craig is still concerned about the security of evidence in police possession, he accepts the police explanation. "I'm not getting any indication that there's anything underhanded or criminal activity associated with that," Craig said.

That original audit was conducted between June and November 2015 after an officer was accused of stealing from an evidence vault. When it was released publicly last year, 72 of 507 exhibits in the random sample were missing. A team of investigators was able to locate 34 exhibits – meaning they were either found somewhere or destroyed. The remaining 38, about 7.5 per cent of the sample, could not be found. The team believes 32 drug-related items were destroyed, and six cash exhibits were deposited into a police bank account, but it was unable to prove that theory.

The six cash exhibits, totalling $4,956, could have been deposited into a police bank account, but the team "could not determine any of this conclusively due to insufficient documentation." Deputy Chief Bill Moore told the Board the random sample was representative of the whole of the evidence, and he expected to see similar results when the broader audit was complete.

What else happened at the meeting? Police to start polling public on satisfaction Halifax Regional Police are hoping to start asking you how they're doing later this year. The Board of Police Commissioners voted at its meeting on Monday to direct police to work with the board and the RCMP to start quarterly telephone surveys on citizen satisfaction with police.

Between 1999 and 2004, Corporate Research Associates (CRA) conducted an annual survey on behalf of police, and between 2004 and 2013, Halifax Regional Police and Halifax RCMP conducted a joint survey. Since 2013, police haven't surveyed residents. Police research coordinator Dr. Chris Giacomantonio started looking at how other areas survey the public after he was hired last year, and talked to CRA – which has a standing offer for HRM polling – about the costs, which will fall between $16,650 and $22,080 annually, cost-shared with the RCMP.

Next steps in street check research An information report submitted to the Board of Police Commissioners on Monday, but not presented or debated, outlines the next steps in the response to the controversial practice of street checks by Halifax Regional Police. Data released by the force last month showed black people in Halifax are three times more likely than white people to be street checked.

Police research coordinator Dr. Chris Giacomantonio plans to "look at socioeconomic and demographic data relating to neighbourhoods in which street checks are conducted," "look at the effectiveness of street checks quantitatively," "look at the effectiveness of the practice qualitatively," and talk to community organizations and the board about what else could be gleaned from the data.