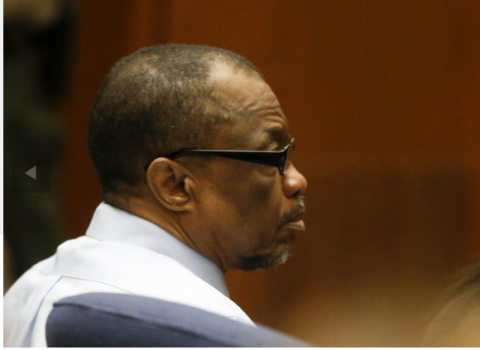 The jury announced Lonnie Franklin Jr.'s punishment in a Downtown L.A. courtroom early Monday afternoon after debating the matter for only a few hours.

Franklin, 63, named the "Grim Sleeper" for the apparent years-long gaps between his murders, is one of L.A.'s most prolific serial killers. In May, the same jury convicted Franklin of murdering ten women and attempting to murder another.

During hearings on Franklin's penalty, police and prosecutors told the jury he likely killed at least five more and raped a woman in the 1970s while serving in the U.S. Army in Germany.

"I'm just glad its over and that he'll never get out to hurt anybody else," said Diana Ware, whose 23-year-old daughter, Barbara was murdered by Franklin in 1987. "Justice has been served."

Prosecutors had asked for capital punishment for one of L.A.'s most horrific killers. Defense attorneys argued for life in prison, raising questions about the evidence against him, and arguing that society no longer supports the death penalty.

Many family members however, said for Franklin, nothing but death would suffice. Like Tracy Williams, who's cousin, Mary Lowe, was found dead in 1987.

The one known survivor of Franklin's attacks, Enietra Washington, testified against him at trial. She told the jury she was walking to a friend's house when Franklin passed by, started chatting with her, and insisted on giving her a ride. Instead, he shot her, sexually assaulted her, and dumped her out of the car.

For years, detectives struggled to solve the murders. Family members accused the LAPD of giving their loved ones short shrift because they were poor and black.

A 2008 article in the LA Weekly chastising the LAPD for failing to publicize that fact that a serial murder was on the loose in South L.A. helped prompt the department to step up its efforts.

In 2010, they arrested Franklin, a one-time mechanic and garbage collector, who lived in a house in the Manchester Square neighborhood.

In 2010, the AP reported he often showed open contempt for prostitutes and friends recalled him bragging about his sexual experiences.

"He would have violent fantasies," Mark Tribble, who knew Franklin, told the AP. "He was putting the girls down ... saying someone is going to kill these girls, saying they were going to end up dead."

Yet no one suspected Franklin, even as police searched for the killer and offered rewards for information leading to his capture.

The break in the case came when DNA found on some of the victims matched Franklin's son, who was in prison. As the son was too young to have committed many of the murders, investigators turned to the father as a suspect.

But they needed Franklin's DNA. So a detective posed as a busboy at a pizza parlor where Franklin was attending a birthday party. He collected a half eaten piece of pizza from Franklin's plate. His DNA was a match with DNA found on seven of the women.

A search of Franklin's home turned up a gun used in one of the murders and pictures of dozens of women—including each of the victims. The evidence was "overwhelming," said Deputy District Attorney Beth Silverman, who tried Franklin's case.

Franklin's demeanor during the case—mostly expressionless throughout the four months of trial—was indicative of his mentality, Silverman said.

"He showed absolutely no emotion," Silverman said. "He has no empathy for others, and I think that was communicated very clearly throughout the entire court of the trial."

The case's closure, she said, provoked a lot of emotions.

"You are always going to be reminded of the woulda, coulda, shoulda," she said.

The penalty, however, ultimately sends a positive message to children like her sister, who spent time in foster care.

"This message has been sent that lives are valuable and if you take a life, yours will be taken," she said.

Franklin will now join the 747 men and women on California's Death Row. The male Death Row is at San Quentin State Prison in Marin County, just north of San Francisco, which is also the site of the state's execution chamber.

The chamber, which was renovated in 2010 for $835,000, has never hosted an execution. California's capital punishment has been on hold since 2006, when a federal judge determined the state's lethal injection process was unconstitutional.