"Immediately after the completed inventory, there were over 790 items of evidence listed on the evidence inventory list which were not found." 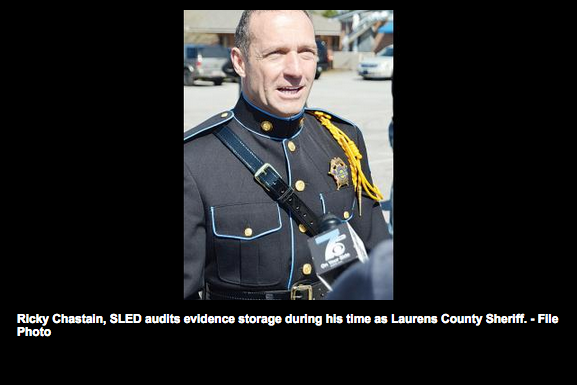 During the inventory, S/A Wallace obtained documents from Sheriff Chastain, former LCSO Capt. Stephon Williams, and LCSO Sgt. Jimmy Sharpton regarding evidence which was converted to county use, lists of firearms which were sold, the LCSO policy in disposition of evidence and documents for the transfer of firearms to other county agencies." - SLED audit

FREEDOM OF INFORMATION REQUEST: The narrative report of a State Law Enforcement Division audit of evidence storage at the Laurens County Sheriff's Office shows that six guns and cash from one pending case are missing; report attached.

Totaling 3,000 pages, the complete audit with attachments is in SLED's hands and the case will be closed. The narrative was obtained by The Clinton Chronicle through the SC Freedom of Information Act.

On page 5 of 7 in the Investigative Report, the first item under "Conclusion" says, "Immediately after the completed inventory, there were over 790 items of evidence listed on the evidence inventory list which were not found."

More than 500 guns were located and these were not on the Laurens County Sheriff's Office inventory list.

The document indicates the audit began in December, 2016. The Investigative Report is dated June 1, 2017.

The investigation began on Dec. 27, 2016, when Senior Special Agent Skipper Wallace met with LCSO Deputy Ron Wood, the evidence custodian, and "obtained all keys to the evidence storage rooms which were located in the old LCSO jail."

Nine officers began working on the audit Dec. 27 and 28, the report says.

"On January 3, 2017, Captain (Robbie) Hendrix met with Sheriff Reynolds and returned the keys to the evidence room," the report says. Reynolds defeated Chastain in the 2016 Republican primary and Stephon Williams in the General Election to become Laurens County Sheriff; he was sworn into office Jan. 3, 2017, in a ceremony at the Hillcrest Square Judicial Center.

"During the inventory," the report says, "S/A Wallace obtained documents from Sheriff Chastain, former LCSO Capt. Stephon Williams, and LCSO Sgt. Jimmy Sharpton regarding evidence which was converted to county use, lists of firearms which were sold, the LCSO policy in disposition of evidence and documents for the transfer of firearms to other county agencies."

"After the inventory was completed," the report says, "the Laurens County Animal Control returned three shotguns which had been converted to county use but there was no paperwork for those guns."

The report details how SLED cataloged the evidence and says, "After looking in the case files, evidence tracking system, SLED iLab, and property returned, there were seven guns which remained missing. For the seven missing guns, S/A Wallace obtained incident reports and E-traces (electronic trace of registered gun owner and purchase location information from ATF."

Wallace started contacted the gun owners. The report says, "S/A Wallace interviewed one of the gun owners, Bonnie Whelchel, who stated that she overheard a former LCSO deputy, Nick Moye, offer to get some guns out of evidence for some nurses. S/A Wallace interviewed Moye regarding the allegations. Moye wrote a statement and denied offering, taking, and providing or selling any guns from evidence to anyone."

Regarding the missing money, the SLED Investigative Report says, "After determining that most of the storage locations for money were incorrect on the inventory list, $386.18 was missing from one case. The case was assigned to Justin Moody, who had not been employed by the LCSO for some time. According to LCSO Investigator Matt Veal, when Moody left, all of this cases were placed into a box labeled 7189, which was located in the foyer area to rooms 1 and 2. S/A Wallace searched the box for the money, however, it was not located. An attempt to located the money was documented in a memorandum to the file."

SLED also looked for marijuana that was missing from drug evidence storage. An officer said the marijuana was "regularly destroyed after it was tested," but there was no document showing that was done.

After everything was investigated, and SLED generated lists, the report says, "There were 398 items of evidence from the inventory list which were not located, 7 of which were guns (one was tracked down, an addendum says). There was $386,18 was (sic) missing from one case. S/A Wallace generated a list of all missing evidence."

The Investigative Report's final listing under "Conclusion" states, "Multiple items of evidence were listed in two or more locations, which made reconciling and correcting the inventory list difficult. Items which were sent out for testing were often not logged back into the system with the same description which further delayed reconciliation."