Senior officers with the Halifax Regional Police faced a rebuke Thursday
afternoon over a lack of communication around a damning audit that found scores of drug and money exhibits couldn't be located in police vaults. 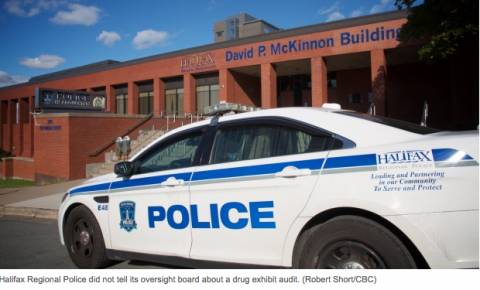 Senior officers with the Halifax Regional Police faced a rebuke Thursday afternoon over a lack of communication around a damning audit that found scores of drug and money exhibits couldn't be located in police vaults.

The Halifax Board of Police Commissioners called a special meeting to find out more about the audit, which was initiated in May 2015, but only shared with the board members last week. "I feel we need to be far better informed, or simply informed — and often we're not," said commissioner Ed MacMaster.

The board has ordered police to provide copies of all audits performed in the last decade, a move led by MacMaster. "There's a huge gap between this board and the professional police service. It's an information gap," he said. "I hope that's what it is." 'My Windows password has more security' than Halifax police evidence vaults, says lawyer Chairman and municipal councillor Russell Walker later told reporters the board couldn't have done anything differently had it been informed earlier. But he said disclosure would have been important because of the perception of the board's role of public oversight.

The board met last Monday, June 20, three days before news of the audit was broken by Halifax alt-weekly The Coast. Police Chief Jean-Michel Blais told the board he never thought of sharing the audit without them before signing off on it June 21. He said it was his decision not to release any information earlier. Coun. Steve Craig said he was upset about not being informed earlier about the audit. "I was extremely disappointed. I'm glad we're having the discussion. We have a long way to go," Craig said. Read the full Halifax Regional Police drug exhibit audit

HRP launched an internal audit of its drug vaults in May 2015, the same time the province's Serious Incident Response Team was called in to investigate an allegation of stolen drugs. Const. Gary Basso was charged with theft, breach of trust and obstruction of justice for allegedly taking 700 grams of the cut substance lidocaine from the drug vaults. In late May, the Crown stayed his charges, which can be reinstated within a year. Police auditors completed in September 2015 the first draft of the drug audit, which found 90 per cent of drug exhibits couldn't be located in Drug Vault 1. Twenty-four percent of exhibits couldn't be found in Drug Vault 2, and 55 per cent of cash exhibits were missing from the money vault.

Search on for drugs, money

Senior officers ordered a second search in February 2016, which found some, but not all, of the missing exhibits. At last count, roughly one third of the audited drug and cash exhibits can't be found, a total of 67 missing exhibits. Blais said a search team has made progress finding the lost exhibits, but refused to give exact numbers until the process is complete.