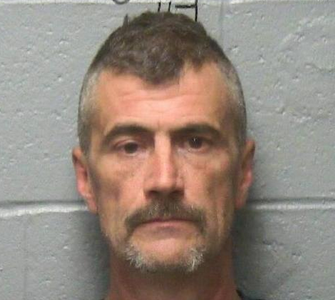 The police chief of Iron Mountain Lake has been arrested and faces felony charges this week following an alleged police pursuit outside of his jurisdiction that reportedly led to the discovery of missing drug evidence at the Iron Mountain Lake Police Department.

Washburn was booked into the St. Francois County Jail Tuesday morning, and a $150,000 cash or surety bond was set in the case.

If released on bail, Washburn is ordered to wear a GPS monitoring device, submit to drug testing and pre-trial monitoring, and is prohibited from consuming alcohol or using drugs. He is also prohibited from possessing a firearm or acting as a law enforcement officer while on bond.

According to probable cause statement from the Missouri State Highway Patrol, Washburn, the Iron Mountain Lake police chief, initiated a pursuit of a man on Sept. 10 at 8:40 p.m. from Farmington into Doe Run.

Washburn reportedly activated the lights and sirens on his Iron Mountain Lake law enforcement vehicle and displayed a shotgun to the man.

According to the report, Washburn had no authority in performing these actions as he was not a commissioned deputy of St. Francois County and was out of his jurisdiction.

Following a report from a St. Francois County deputy who observed Washburn ingest what the deputy believed to be methamphetamine, and a report regarding missing methamphetamine evidence in a pending criminal case, a search warrant was applied for and granted to search the Iron Mountain Lake Police Department's evidence locker.

Following Washburn's admission to taking the meth, a search warrant was obtained to search the chief's home for other stolen items and controlled substances.

Inside Washburn's bedroom in the home, the report states that officers located a substance that field-tested positive for methamphetamine.

Washburn said there was "a semi pursuit, I guess, on Thursday evening about 8 o'clock where a darked-out SUV approached me in a very aggressive manner at the stop light at 67 and 221, made multiple traffic violations in front of me, forced me basically to interact which he ultimately failed to yield and took an elevated position on Cochran Road and turned sideways and blocked the road and then come down the hill through the ditch towards me and then fled off to up the hill. And as I waited for county backup, they got out of sight and then shortly came back into sight, spoke to the deputy, and was released from the scene."

When asked if the driver of this vehicle would be charged, he stated, "I plan on charging them. Ultimately I know I enforce state law as well. I was outside of my venue. Ultimately it lays in within county jurisdiction but 'cause it seems at the moment it's a conflict of interest, being the victim and the filing officer as well, so I don't know how it's going to go."

The police chief of Iron Mountain Lake has been arrested and faces felony charges this week following an alleged police pursuit outside of his jurisdiction that reportedly led to the
https://dailyjournalonline.com/news/local/crime-and-courts/iml-police-chief-arrested-charged-with-stealing-drug-evidence-false-impersonation/article_ae83defe-7536-5b77-9be8-dbae46385635.html
Tweet
How do you feel about this post?
Happy (0)
Love (0)
Surprised (0)
Sad (0)
Angry (0)
Tags:
Missing drug evidence
Suspect Arrested in 1974 Cold Case Murder of Carla...
SC cop stole $80,000 from drug money. Will he get ...
Comment for this post has been locked by admin.