She wasn't doing her job and sometimes appeared hung over and "out of it." Officers couldn't get the evidence they needed for court hearings. 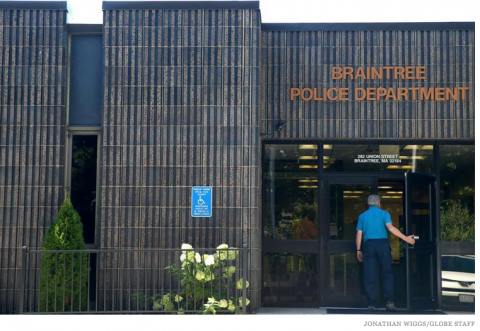 BRAINTREE — For months, police in this suburban police department had complained about Susan Zopatti, a veteran officer who was in charge of the evidence room. She wasn't doing her job and sometimes appeared hung over and "out of it." Officers couldn't get the evidence they needed for court hearings.

They repeatedly warned their supervisors that Zopatti was not fit to oversee an inventory of seized money and drugs, according to two people with close knowledge of her tenure in the department.

"Something was wrong with Sue," one former Braintree officer said.

A 50-year-old who had worked in her hometown department for almost 21 years, Zopatti desperately needed help. She was kind, helpful, and funny, and was struggling to care for her cancer-stricken mother, so her supervisors gave her leeway and a flexible schedule.

But despite growing concerns about her increasingly unreliable behavior — and a request from the deputy chief that Zopatti be transferred from her post — Chief Russell W. Jenkins left her in charge of the evidence room, a position that one person with knowledge of the situation described as perhaps the most important in the department.

Had anyone taken a close look at her workplace in recent months, they would have found torn evidence bags missing cocaine and cash, a scandalous disarray that now threatens to compromise hundreds of criminal cases and has triggered an investigation by the state attorney general's office.

In a phone interview Friday, shortly after announcing he would retire early next month at the mayor's request, Jenkins said he knew about Zopatti's checkered history in the department, including complaints about her attendance and a 2012 effort by then-chief Paul Frazier to fire her for smoking cigarettes, which is against state law for police. But Jenkins had no inkling that she might have more serious issues, he said; in his presence, she never appeared impaired. And the complaints to the deputy chief were strictly about work performance, he said, not suspicions of substance abuse.

"I was trying to understand her situation at home and show some compassion to her in hopes she could work this out," Jenkins said, "unaware of the fact that she was doing anything illegal in there. And now, I have to take responsibility for that."

Zopatti committed suicide in May, one week after meeting with an auditor brought in by Jenkins to inspect the evidence room. By that time, more than $400,000 had vanished, some of it through holes cut in the bottom of evidence bags, auditors would later find. Thousands of drug samples and between 60 and 70 guns were gone. Two of the guns were later found in Zopatti's home.

Zopatti's precise role in the evidence scandal is not clear. But a review of public documents and interviews with six people with close knowledge of the department reveal an officer whose life visibly unraveled in recent years. Even those who said they were not personally fond of Zopatti said they were outraged that she was left in the evidence room with so little oversight.

"They failed her, they really did," said a former Braintree officer who knew Zopatti. "What she did wasn't right, but still. It cost her her life."

Jenkins, who assigned Zopatti to the evidence room about eight months after becoming chief in 2012, said that missing the warning signs was a "cross I have to bear."

"I'm going to have to live with that," said Jenkins. "I'm paying for it with my own retirement."

In a phone interview Friday, Zopatti's husband, Mark, said his wife only missed work because she had taken family leave to care for her ailing mother. He denied allegations that his wife's behavior was erratic or troubling.

Zopatti joined the department in 1995 as a patrol officer. Three years later, Zopatti's then-husband accused her of taking drugs and drinking alcohol, according to a document in their divorce filing. In court records, Zopatti denied the allegations.

In 2001, Zopatti and another Braintree officer sued the department for gender discrimination and sexual harassment, accusing the department of denying training opportunities for female officers and disciplining them more harshly. The women voluntarily dismissed the suit six months after they filed it.

A former officer who knew Zopatti recalled her as friendly and generous, the type of person who would call the station to see who wanted coffee on her way into work.

But by 2012, according to two people with direct knowledge of the situation, Zopatti was a problem employee, chronically late or absent. Then-chief Frazier had become fed up.

When evidence surfaced that she was smoking cigarettes — a fireable offense for police in Massachusetts — Frazier moved to dismiss her. But disciplinary officials found he didn't prove his case, so she kept her job, according to people with knowledge of the situation.

Less than a year later, after being appointed chief, Jenkins put Zopatti in charge of the evidence room after she applied for the position.

"To be frank, I was hoping that it would turn her around," said Jenkins. "It seemed that when she first got that job, she put her heart and soul into it."

But Zopatti continued her pattern of lateness and absences, according to several people familiar with the situation, and sometimes appeared impaired. Police had trouble getting evidence from the room. Officers began complaining about her to Deputy Chief Wayne Foster, who brought the issues to Jenkins. Foster did not return requests for comment.

Beginning in April 2015, Jenkins said he and his deputy counseled Zopatti on "work performance" issues twice. Foster wanted to remove her from the evidence room, but Jenkins said he urged compassion for a woman facing her mother's impending death.

Never, he said, did he imagine she might be stealing.

"It's a single person, working within a room where she's not got somebody looking over her shoulder watching what she's doing," Jenkins said.

Jenkins said he decided to have an audit conducted in early 2016 not out of suspicion, but because he thought it was a smart move for the department. There had been one incident, he said, in which evidence had gone missing, but he believed the audit would clear it up. The day Zopatti met with the auditor was the first time Jenkins thought she might have issues more serious than attendance problems, he said.

Foster came to him that day with a suspicion that Zopatti was under the influence of some substance, he said, and they started an investigation.

A week later, Zopatti was dead.

Since Zopatti's suicide, the department has recovered about $140,000 and all but 12 of the missing guns.

The audit found that some of the missing evidence predated Zopatti's tenure, destroyed in "purges" that were authorized, if not properly documented. But evidence continued to vanish after 2012, when there were no additional purges.

More than 30 drug cases have already been dropped by Norfolk County prosecutors because of compromised evidence, and many more are expected.

Zopatti's family has been devastated. In her obituary, they remembered her as a loving mother and wife, a woman who adored her dog Libby, trips to the Cape, camping, painting, and the band U2.

On social media are photographs of Zopatti smiling with her husband. A picture she made for him shows him smiling as a dog licks his face. She had planned to give it to him for Father's Day, he wrote under the image.

In one photograph he posted in June, Zopatti smiles in the sun, the ocean at her back. A commenter wrote that Zopatti was beautiful, but that she was angry at her.

"Don't be," her husband replied.

Despite growing concerns about Susan Zopatti’s increasingly unreliable behavior — and a request from the deputy chief that she be transferred from her post — Chief Russell W. Jenkins left her in charge of the evidence room, a position that one person with knowledge of the situation described as perhaps the most important in the department.
https://www.bostonglobe.com/metro/2016/09/24/braintree/OwuodTQClK3ZhtUeCgOzCK/story.html
Tweet
How do you feel about this post?
Happy (0)
Love (0)
Surprised (0)
Sad (0)
Angry (0)
Tags:
East Coast
Precinct 4's evidence destruction scandal part of ...
Police officer at center of Braintree evidence roo...