The boxes of material held exculpatory evidence and show that a detective lied at the trial, the defense team says. 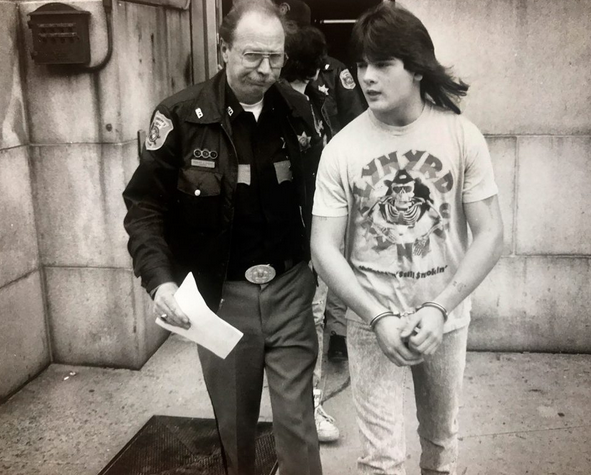 One of the now-retired Portland police detectives who investigated the 1989 murder of Jessica L. Briggs has turned over two boxes of case files he has kept in his attic, including material never before disclosed to Anthony Sanborn Jr.'s defense team, court documents show.

Portland police Detective James Daniels, the lead investigator in Briggs' murder, returned the boxes to the Portland Police Department on April 26, after they were stored for an unknown amount of time in his attic, according to court documents filed Monday by Sanborn's attorney, Amy Fairfield. She used the filing to reiterate her request for a judge to set aside Sanborn's conviction.

Sanborn was sentenced to 70 years in prison for the murder in 1992 and had been in jail until he was freed on bail April 13, when a judge determined that he was likely to prevail in his effort for post-conviction review.

In the new court filing, Fairfield wrote that she found original witness statements, original police reports, photographs of alternative suspects, and what appeared to be physical evidence, including a knife and a box cutter. Fairfield also asserts that handwritten investigative notes turned over by Daniels' partner, Daniel Young, show that Daniels lied on the witness stand at Sanborn's 1992 trial about who was shown photo lineups during early moments in the investigation.

"There was … evidence and information in those boxes that was exculpatory and absolutely and unequivocally should have been turned over to the defense," Fairfield said in a telephone interview Monday. "There is conclusive proof of some really bad behavior on the part of the state actors who handled this case. I had it before. I just have a lot more of it now."

This most recent filing adds to Fairfield's argument that police and prosecutors colluded to hide evidence from the defense nearly 30 years ago and coerce witnesses to testify against Sanborn, who has proclaimed his innocence since he was charged with Briggs' murder in 1990.

According to court records and media accounts at the time, the murder investigation began on a drizzly morning in May 1989, when police were called to the Maine State Pier, which at that time was partially occupied by a Bath Iron Works dry-dock.

Near a dumpster at the end of the pier behind the BIW receiving department, police found a pair of black high-heeled shoes, a woman's earring, a pack of cigarettes and a fresh pool of human blood. Drag marks pointed to an opening that led to the water. When divers pulled Briggs' body from Casco Bay, they found her throat had been cut, and she was stabbed multiple times and nearly disemboweled.

During the trial, workers from BIW testified about seeing a woman who was apparently Briggs walk across Commercial Street headed toward the pier around midnight, pushing a bicycle with a young man at her side.

BIW's second shift had just let out, and a charter bus was idling near the entrance to the pier to take workers back to the Bath area, documents from the trial say. Police interviewed and turned over information about three interviews with workers who were on the bus that night.

But Fairfield alleges that notes provided by Young show they interviewed at least 11 people. One of them was John Asquini, the bus driver, who saw a third person walking ahead of Briggs and her companion.

Asquini worked with a police sketch artist to develop a composite of the man, but the sketch was never turned over to the defense at trial, and had never been seen by Sanborn's attorneys until Fairfield viewed it April 28, she wrote in the latest filing.

Fairfield said she has been looking for that composite sketch ever since she took on Sanborn's appeal in 2016. "I think that could be the end-all, be-all," she said.

A story published June 1, 1989, in the Evening Express newspaper described how police had prepared a sketch of someone seen on the pier with Briggs that night, but they did not release it or indicate whether they believe the person in the sketch was the man who killed her. It is also not clear whether the sketch provided in court documents this week is the same sketch described in the Evening Express story.

Also described in the new filings is a segment of video footage that was altered and edited before it was disclosed to the defense, Fairfield said.

In the filing, Fairfield describes how a roughly 10-minute segment was prepared by a news crew at WCSH-TV shortly after Briggs was killed. The segment had six parts. But the copy of the footage turned over to the defense in the case was reproduced without audio and omitted the final part.

The original and unedited news reel has been turned over to Fairfield, she wrote, and the sixth deleted scene showed Portland police detective Young interviewing BIW employees on the bus back to Bath.

At trial, Daniels said he did not show any photo lineups to people on the pier because they all said they could not identify anybody. But the handwritten notes by Young appear to contradict this testimony directly.

At the top of one page, Young wrote "Photo Series #2," with a list of names of potential witnesses, and their reactions to viewing a lineup. Later on in the notes, a page is titled "Line-up as shown," with six entries; two are names, including "Ingalls," another witness and a friend of Briggs interviewed by police at the time. The other four entries are all five-digit numbers.

Fairfield also reiterates allegations that she can prove that police had more extensive knowledge of accusations of rape against a key witness who testified against Sanborn.