The third gun, the 9mm, made its way back out onto the streets of the community and was used in a deadly shooting in Dallas County, the chief said. 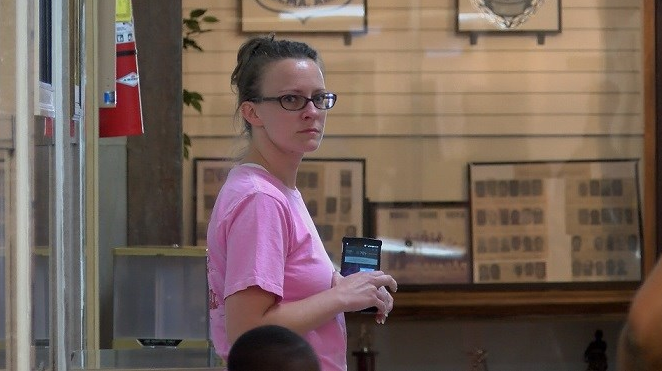 Selma police officers took one of their coworkers into custody Tuesday as officials revealed that several items had been taken from the department's evidence vault, including weapons.

Adrianne Michelle Canterbury, 34, an evidence technician, was fired and arrested at Selma Police Department Headquarters and charged with several counts of theft, as well as an ethics violation for allegedly using her office for personal gain and tampering with evidence.

Last month, Selma police were notified by the Dallas County school system that Canterbury's son had a large amount of jewelry in his possession, which Chief Spencer Collier says turned out to be 37 fake gold necklaces taken from the evidence room.

According to Collier, Canterbury was questioned about the jewelry and admitted to taking it out of the secure area where she worked.

She was placed on administrative leave and separate investigations were launched into the matter by the department's Internal Affairs Unit and Criminal Investigations Division.

Police soon learned that three guns- a GLOCK, Taurus 9mm, and Ruger .22- were also missing from the evidence vault.

During a search of her home on Friday, Collier says police were able to recover two of the three missing pistols.

The third gun, the 9mm, made its way back out onto the streets of the community and was used in a deadly shooting in Dallas County, the chief said.

"She admitted to taking it and stated that was traded with someone for electronic equipment," Collier said.

The homicide happened last month as a group of friends was riding down the road in the Sardis area , according to Captain Mike Granthum with the Dallas County Sheriff's Department.

Four teenagers, including the victim and suspect, were in the same car near the intersection of County Road 67 and Industrial Drive.

The Dallas County Sheriff's Department says the suspect, Ratravious Sanders, 19, whom Granthum identified as a senior at Selma High School, managed to get a gun and was trying to show it off to his friends in the car.

He was in the back seat and tried to shoot it out the window of the vehicle, but the 9mm malfunctioned so he brought it back inside to see what the problem was and it went off, Granthum explained.

The bullet went through the front passenger seat and shot the victim, Rufus Williams, 19, in the back. The female driver, who is Williams' girlfriend and Sanders' sister, pulled the car over and the teens called 911. Williams was dead on arrival, officials said.

Ratravious Sanders was charged with murder and is being held without bond in the Dallas County Jail. The sheriff's office says Sanders missed his prom, which was held the night of the shooting.

Once investigators traced the gun Sanders used in an effort to find out how he got it, Granthum says the results came back showing it was part of Selma PD evidence so the sheriff's department notified the police department of their findings.

"Any loss of life is unacceptable but the thought of the weapon coming out of our evidence vault is just something that goes beyond unacceptable," Chief Collier said. "She's a new employee, but nonetheless, common sense, along with policy and criminal law would and should dictate that you can't items out of an evidence vault. There's a chain of custody procedure and she clearly violated that."

Canterbury had been employed at the police department since November. Before that, she worked as a dispatcher with the Autauga County Sheriff's Office.

She could face additional charges in connection with the fatal incident in Dallas County involving the stolen 9mm, police and prosecutors said.

A new supervisor has now been placed in charge of the evidence vault and an inventory continues to be done, but nothing else is believed to be missing, Collier added.

When asked if the department will be making any changes as it pertains to evidence due to the incident, the chief said he reviewed the policies and procedures and they're adequate.

"They just need to be followed by personnel," the chief stated. "You're never happy when something like this happens and you have to deal with it. But it also demonstrates that we are willing to police our own and this is an administration in Selma that's just not going to tolerate any type of corruption."

Evidence technicians respond to crime scenes and collect evidence. They drive marked cars and wear slightly different uniforms than police officers. Only the two evidence techs on staff and the arresting officer who oversees the evidence vault have access to it.

Last month, another civilian employee was terminated at the Selma Police Department for improper conduct. According to Collier, it was over the mishandling of receipts.

Selma Mayor Darrio Melton commented on the evidence scandal following Canterbury's arrest, stating: "We have a zero-tolerance policy for corruption in Selma, and we will continue to terminate and prosecute anyone who breaks the law or the public's trust. I have confidence Chief Collier and District Attorney Michael Jackson will handle this matter professionally and thoroughly to ensure justice is served and no incident like this occurs again."

Collier referred to Canterbury's case as an isolated incident.