A man serving prison time for a 1995 rape and murder case in Pontiac has been identified and is now charged in a similar slaying in 1994 that went cold until recently, when DNA indexing tied the man to the crime. 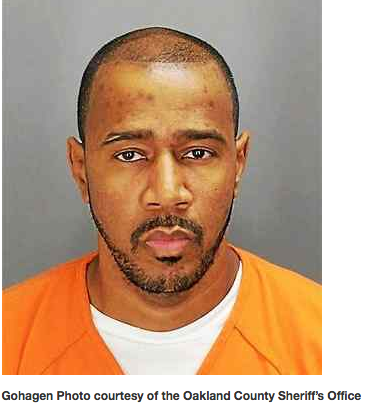 A man serving prison time for a 1995 rape and murder case in Pontiac has been identified and is now charged in a similar slaying in 1994 that went cold until recently, when DNA indexing tied the man to the crime.

Brantley's body was found mutilated and wrapped in a curtain in Hawthorne Park, which is located between Telegraph Road and Walton Boulevard on Pontiac's northwest side.

Gohagen had denied knowing Brantley, but others had said the two were friends, according to investigators.

The case had gone unsolved since Brantley's body was found, but Oakland County Chief Assistant Prosecutor Paul Walton said DNA profiling technology that wasn't around in the 1990s ultimately tied Gohagen to the killing.

The 44-year-old is serving time on second-degree murder and criminal sexual conduct charges tied to the 1995 rape and brutal beating of Pontiac resident Margaret Midkiff, a mother and cafeteria worker at the General Motors Lake Orion plant who died at 43 years old.

Midkiff's son found her body in the basement of her home on Peacock Street, bloodied from being beaten and kicked, with a pillow case over her head.

Gohagen, who was originally charged with first-degree murder and first-degree criminal sexual conduct, along with brothers George and Melvin DeJesus, ultimately took a plea deal after telling investigators he was intimidated into being involved.

As a part of his plea deal, Gohagen agreed to testify against the Dejesus brothers and pleaded guilty to lesser, second-degree murder and criminal sexual conduct charges.

Both George and Melvin DeJesus have maintained they are innocent in Midkiff's slaying. Family friends of the brothers said that Midkiff, who was a neighbor, once babysat them both. None of the DeJesus brothers' DNA was found at the crime scene, but Gohagen's was.

Oakland County Sheriff Michael Bouchard said that he doubts the Midkiff case would be reopened, but said that Gohagen's DNA is now in the FBI's indexing system.

"Now that his DNA is on file, it would get a hit should any other evidence be submitted," said Bouchard.

"I hope he will be convicted on (the Brantley murder and rape) charges ... because he will never see the light of day."

Because of his sentence in the Midkiff case, Gohagen may have gotten out of prison in 2031, according to state prison records.

Bouchard said the recent charges serve as a message to families of murder victims whose cases are unsolved. "We will never forget about your pain, and will never stop trying to solve these heinous crimes."

Gohagen, whose bond was denied, is in custody at the Oakland County Jail awaiting his next court date.

The 44-year-old is set for a probable cause conference at 1:30 p.m. Oct. 25 in Chief 50th District Judge Cynthia Thomas Walker's courtroom. A tentative preliminary exam has also been scheduled for 9 a.m. Nov. 1.

Enter some description here...
http://www.theoaklandpress.com/general-news/20161017/investigators-dna-ties-man-now-charged-in-pontiac-womans-1994-cold-case-slaying
Tweet
How do you feel about this post?
Happy (0)
Love (0)
Surprised (0)
Sad (0)
Angry (0)
Fired deputy pleads guilty to theft, gets a year o...
Massachusetts uses DNA test to predict a cold case...
Comment for this post has been locked by admin.