Rather, investigators believe Acosta was hunting for cash. And they say he found plenty of it on a few unsuspecting drivers — and an undercover
agent. 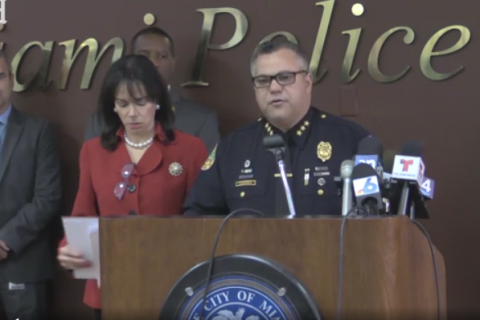 On the night he was arrested, rookie Wynwood-beat cop Jose R. Acosta was patrolling Miami's trendy arts district and making traffic stops — only police say he wasn't interested in enforcing the rules of the road.

Rather, investigators believe Acosta was hunting for cash. And they say he found plenty of it on a few unsuspecting drivers — and an undercover agent.An investigation launched in February when several people called Miami police to complain about money being stolen during traffic stops resulted Friday in Acosta's baffling arrest and subsequent firing after only several months on the job. In a Monday press conference, Deputy Miami Police Chief Luis Cabrera and Miami-Dade State Attorney Katherine Fernandez Rundle slammed the fired 22-year-old for tarnishing the badge, and said they're looking for more victims.

"Officer Acosta sold his integrity and sold out his community," Fernandez Rundle said. "Instead of seeking to rid Miami of crime, he became a criminal himself."

Acosta's attorney, George T. Pallas, defended his client in an email to the Miami Herald as "a young, up-and-coming police officer who has an unblemished record of service to this community."

"It is unfair to attribute every citizen complaint of missing money to this officer," Pallas said, declining to comment further.

Police believe Acosta, who was hired on May 24, has been trolling Miami's streets since just about the time he was freed to operate on his own without the supervision of a field-training officer. Cabrera said internal affairs received "several" complaints in February about missing money, which prompted a joint investigation with the Florida Department of Law Enforcement and the state attorney's office.

Cabrera wouldn't say if the complaints specifically named Acosta, but investigators keyed in on the rookie cop as their guy. They set up a sting and watched Acosta Friday night as he patrolled Wynwood.

Five times that night, according to an arrest report, agents watched as Acosta flashed his lights, pulled over a car, had the driver step out, searched the vehicle, and then let the driver back behind the wheel. Without writing any tickets, police say, he sent each driver on their way — some, apparently, a little lighter in the wallet.

Police say he didn't inform dispatch on any of the stops. Neither did Acosta have probable cause to pull over any of the motorists. Cabrera said Acosta seemed to pick his victims at random, seeking out information on the drivers on his police-issued laptop before making a traffic stop.

On the sixth occasion, police say Acosta hit the mother lode: a driver with $1,250 cash stuffed in a wallet and in his pockets.

According to police, Acosta patted down the driver, took the money from his pockets, and then placed him in the backseat of his police cruiser while he searched the driver's car. When Acosta let the driver out and pulled away, Cabrera said $940 was missing.

But the driver was an undercover agent sent into Wynwood with the mission of catching Acosta's attention. And the bills were marked.

After the stop, investigators waited to see if Acosta would report the cash. He did not, according to the report.

So when Acosta left Miami's central station and headed home just before midnight, investigators followed him and stopped him before he went inside. Once in custody, Acosta admitted to having stolen as much as $6,000 over the last two months, including $2,000 from other drivers Friday evening, according to a source familiar with the investigation.

"This officer took advantage of his position, his badge, his oath and the public confidence," Cabrera said. "That's something that is not acceptable."

Acosta has been charged with burglary of an unoccupied conveyance and third-degree grand theft. Fernandez Rundle said more charges could be forthcoming as the investigation continues.

Acosta's arrest has befuddled police brass, who say there were no red flags on his polygraph exams, psychological evaluations or background check. Cabrera defended the department's hiring practices Monday, and Fernandez Rundle stressed how quickly investigators worked to stop the young officer from victimizing anyone else.

"These acts of public corruption make everyone cynical about law enforcement. It tarnishes the good, hard work that is done by the overwhelming vast majority of police officers," she said, adding: "Officer Acosta did a deplorable thing. But he was caught and he's going to be held accountable. He was investigated by his own. That has to in many ways restore confidence and trust in the good law enforcement agents we have."