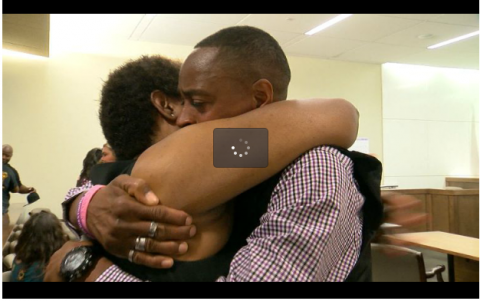 (8/3/16) FREEHOLD - A Long Branch man who served four years in prison for rape is officially exonerated of the crime thanks to DNA evidence.

Dion Harrell, 50, says that he is overwhelmed by emotion to hear that his name is finally cleared. He says that he thanks his family for supporting him. "I love my family," he says. "They knew I didn't do anything, stood by my side through thick and thin.

They were the ones I turned to. Couldn't turn to anybody else." moreCrime Harrell was 22 years old when he was convicted of raping a teenage girl in Long Branch in 1988. The victim identified Harrell as her attacker.

Harrell was so adamant about his innocence that after his release in 1997 he refused to register as a sex offender under Megan's Law twice and was thrown back in jail. He says he couldn't live with his sister because of her two young kids, couldn't get a decent job, and was ostracized by the community.

He turned to the Innocence Project for help. The New York-based organization provides aid to the wrongfully convicted. "They didn't give up on me. You know you're right, keep going for it," Harrell says. "If you didn't do wrong, maintain your innocence. Fight like I did fight. I ain't gonna back down." Harrell's attorney with the Innocence Project says the case has implications for many others in New Jersey. She says that those convictions were also based on faulty forensic evidence. Harrell did not say if he planned on filing a lawsuit against the state for his wrongful conviction.