Mr. Volk is just the tip of the iceberg with respect to poor management and bad forensic policy," 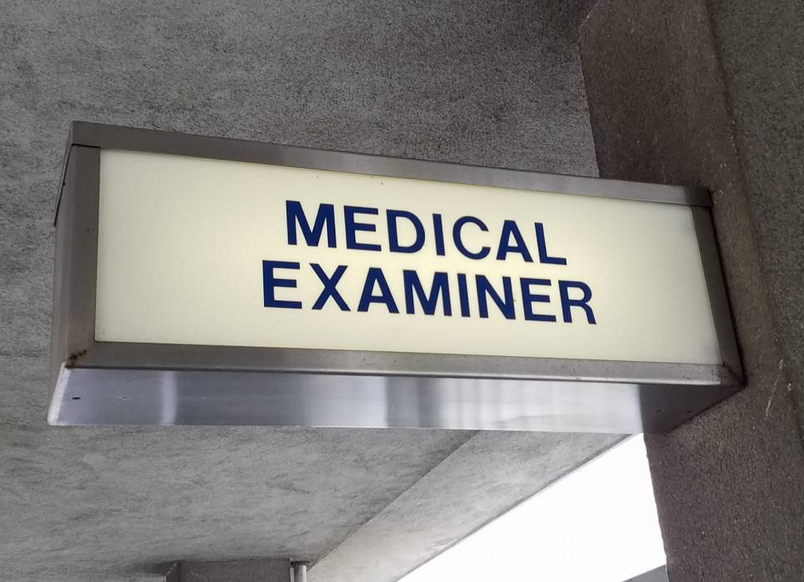 A lab analyst for the San Francisco medical examiner's office had driven more than 700 miles east toting a sealed bag of drug evidence before he was pulled over for speeding in Washington County, Utah.

During the Aug. 31 traffic stop, sheriff's deputies discovered a bag containing "a large crystal looking item," along with other baggies with suspected crystal meth and white powder.

'Mr. Volk is just the tip of the iceberg with respect to poor management and bad forensic policy. He is a reflection of the unregulated, and unmonitored management at the office.'Former employee of the San Francisco medical examiner's office

Deputies also found suspected meth pipes and 14 unidentified pills elsewhere in the car. There was also paperwork from the San Francisco Office of the Chief Medical Examiner. The analyst, Justin Volk, was arrested and charged with a misdemeanor for possession and intent to distribute drugs.

Several former employees of the San Francisco medical examiner said the apparent theft of drug evidence should have been prevented by the office's own protocols.

Those procedures, however, were not followed in recent years, according to two former employees who worked with Volk. Each one spoke to KQED on the condition of anonymity because they feared that speaking out could lead to reprisal in their current jobs.

The former colleagues who worked at the toxicology lab until recently said the lab's supervisors allowed illicit drugs to pile up in the evidence room, let protocols lapse designed to prevent evidence mishandling and ignored Volk's increasingly erratic behavior.

"Mr. Volk is just the tip of the iceberg with respect to poor management and bad forensic policy," one former employee said. "He is a reflection of the unregulated and unmonitored management at the office."

Volk is on administrative leave and under investigation, according to the city administrator's office, which oversees the medical examiner.

When a person dies in a sudden, violent or unexpected way, investigators for the medical examiner's office often collect and store any drugs found at the scene.

Security for that kind of evidence is crucial, according to Dr. Nikolas Lemos, the former chief toxicologist for the office, who established rules when he was hired in 2003 on how to treat drug evidence.

"We actually implemented very strict protocols for the medical examiner's investigators to account for every pill, every syringe, every crystal they brought into the office," Lemos said.

Investigators were supposed to create an inventory of the drugs, seal them into ziplock bags and drop them into a secure slot that could only be opened by technicians in the toxicology lab.

During Lemos' tenure, two lab employees had to be present to retrieve the drugs from the locker, and they were supervised in the process.

"I was always present when junior staff was removing medications and pills," Lemos said. "I was pretty much like a hawk because I knew that the temptation is great. And the fact is that without supervision, you could just mishandle the evidence."

The protocols also included boxing up the evidence and in most cases setting a date for destruction after a year.

All of this took place in the lab, in plain sight of staff.

Lemos said the protocols were designed to prevent even well-trusted staff members from having access to drug evidence without supervision.

"I cannot imagine a worse situation than when you are about to destroy medications or pills or drugs, you let somebody into the vault by themselves and they just take whatever they want," Lemos said. "The supervisor and the chief toxicologist both should be there, taking turns, hands-on supervising this process from start to end."

Lemos resigned in 2016, alleging that he had been pressured by supervisors to engage in "unlawful practices" at the office. He reached a $100,000 settlement with San Francisco in 2018 for wrongful termination.

According to one source, the office abandoned many of Lemos' protocols after he left.

Former colleagues said that Volk's immediate supervisors, Dr. Luke Rodda and Sue Pearring, had received a number of complaints about the lab technician's behavior over the last three years.

Whistleblower complaints about specific incidents of lax oversight at the lab, such as the illegal transport of drug evidence in 2017, had also been filed with the city controller, according to a former employee, but no disciplinary action was taken.

KQED sent a list of the former employees' specific allegations to the city administrator's office, the city's chief medical examiner, the city controller and Rodda and Pearring. None commented on those allegations.

The city administrator deferred questions about the toxicology lab's protocols for drug disposal to the city controller, which launched a review of drug evidence procedures after Volk's arrest. The controller is expected to make the findings of that review publicly available in mid-October.

The medical examiner's current protocols require that two staff members log and sort drug evidence. After a year, that evidence should be "sorted and sent for disposal" by a pair of employees with different job classifications.