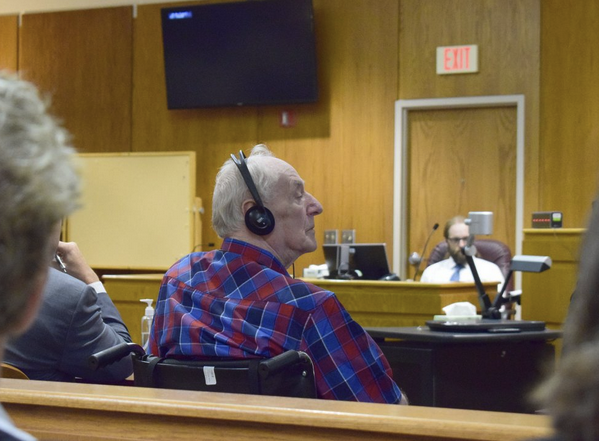 MARINETTE, Wis. — A jury Tuesday took only two hours to convict an 84-year-old man of murdering a Green Bay, Wis., couple at a campground in Marinette County more than four decades ago.

After a nine-day trial in Marinette County Circuit Court, Raymand Vannieuwenhoven was found guilty on both counts of first-degree murder in the deaths of 25-year-old David Schuldes and 24-year-old Ellen Matheys on July 9, 1976.

In her closing argument, Marinette County District Attorney DeShea Morrow said though the prosecution presented complex evidence throughout trial, the case itself was simple.

"This is a rape/homicide," Morrow said, adding the sexual assault and murders were "inextricably linked."

"Quite simply, Raymand Vannieuwenhoven saw an opportunity. He wanted to rape Ellen Matheys," Morrow said. "He killed David Schuldes to get him out of the way, raped Ellen Matheys and then killed her so there would be no witnesses."

Morrow reminded jurors that Karen Daly, a retired employee of the Wisconsin State Crime Lab who assisted the late Dr. Robert Huntington with the autopsies, testified to a semi-liquid amount of semen found in Matheys' vagina and shorts that contained intact sperm, indicating recent sexual activity.

"The sperm identified in those shorts in 1976 contained the key to this whole case," Morrow said, noting there was a 1-in-29 sextillion chance the profile developed from the semen that matched Vannieuwenhoven's DNA was an error.

"Bottom line? Raymand Vannieuwenhoven is the only man on earth, many times over, who could have been the source," Morrow said.

During trial and again in her closing argument, Morrow showed jurors a photo of Matheys as she was found after her murder: with her shorts unbuttoned, her shirt pulled over her head and her body face down in a loose fetal position.

"The defense wants to separate the sex from the homicide," Morrow said. "They desperately want to do that because of the unequivocal evidence."

Morrow also reminded jurors of testimony by Huntington's mentee, Dr. Robert Corliss, professor of pathology and director of autopsy at the Department of Pathology and Laboratory Medicine at the University of Wisconsin School of Medicine and Public Health.

"Based on, he said, the totality of all the circumstances, the injuries seemed consistent with a sexual assault," Morrow said, noting Matheys had three vaginal contusions as well as marks on her upper thigh and left breast.

"All of these injuries together, combined with how Ellen was found, there's no other conclusion you could reach,"Morrow said.

Morrow acknowledged law enforcement found no evidence linking Vannieuwenhoven to the shooting while searching his Lakewood, Wis., home in 2019.

But, Morrow said, Vannieuwenhoven made his biggest mistake when he allowed Matheys to put on her shorts after the assault instead of disposing of them.

"DNA doesn't lie. It's a scientific fact. It doesn't have motive, it doesn't have agenda, it just is," Morrow said. "Witnesses can misremember something, they can misspeak, but DNA doesn't."

Morrow concluded her closing argument with an audio recording of a phone call where Vannieuwenhoven seemed to say he "dropped" Schuldes and Matheys and laugh at the charges against him.

"Today is the day of long-awaited justice for Ellen and David," Morrow said.

Defense attorney Lee Schuchart said Vannieuwenhoven could not hear well during the phone conversation because he was not wearing his hearing aids and mistakenly assumed the charges were "dropped."

"When you have a weak case, you have to come up with anything that you can call a confession and that's what the state has done," Schuchart said.

In his opening statement of the trial, Schuchart told jurors he and fellow attorney Travis Crowell would not challenge the semen found in Matheys' shorts belonged to anyone but Vannieuwenhoven.

"I stand here and that's still true. We didn't dispute any of that," Schuchart said, adding a DNA analyst with the Wisconsin State Crime Lab in Madison named Rebecca Bohr testified an analysis could not tell when, how or why the semen ended up in Matheys' shorts.

"DNA is but just a piece of this puzzle and that is all (prosecutors) have as it relates to physical evidence that would connect Ray to this crime," Schuchart said. "They have not proven beyond a reasonable doubt that Ray shot David and shot Ellen."

Schuchart referenced the testimony of two witnesses — Robert Swanson and Kim Huemphner — who claimed they heard gunfire while at the campground where Schuldes and Matheys were killed and later saw a man with a rifle leaving the campground.

Swanson said he did not get a good look at the man, but believed the rifle was a .30 caliber, a size consistent with the bullet used to kill the couple. Huemphner said he believed the man had medium-length hair, a mustache and was no older than 28 years old.

Huemphner also told jurors the man with the rifle walked toward a Plymouth car with a Michigan license plate, Schuchart said.

But investigators tested Vannieuwenhoven's rifle and confirmed it was not used in the murders, Schuchart said.

"The description of the shooter doesn't fit, there's no murder weapon, the guns didn't fit and Ray has no ties to the getaway vehicle or the state which it's from," Schuchart said.

Schuchart also said there were no signs of a struggle where Matheys was found.

"Nothing else that would suggest there was a brutal rape that had occurred," Schuchart said. "Nothing."

Schuchart said nothing was collected from the site other than Matheys' body and clothes because there was nothing of "evidentiary value" to collect. He also noted there were no witnesses who testified they heard screams in the campground the day of the murders.

Schuchart then said Corliss testified Matheys' bruises could have been as old as 72 hours and be consistent with consensual sex.

"It's a tragic case, but closure and justice are not defined by wrongfully convicting Ray," Schuchart said.

After Marinette County Circuit Judge James Morrison read the verdict, he asked that both the prosecution and defense submit memorandums on sentencing, as the murders occurred in 1976 so he was obligated to follow the guidelines of that period.

Sentencing is set for Aug. 26.

According to the criminal complaint, Schuldes was fatally shot through the neck with a .30-caliber firearm as he waited for Matheys outside a bathroom at the McClintock Park campground in the Town of Silver Cliff. The shooter then either ordered or chased Matheys into a nearby wooded area, where she was sexually assaulted and, after being allowed to put some of her clothing back on, shot twice in the torso.

Though the case went cold, Marinette County detectives continued to have DNA from semen left in Matheys' shorts periodically analyzed to see if a possible match might surface, the complaint stated.

In 2018, investigators submitted evidence to Virginia-based Parabon Nanolabs, which traced the DNA to a specific couple with ties to the Green Bay area.

Further investigation led to Vannieuwenhoven, by then a widower living in Lakewood, Wis. A DNA sample obtained from Vannieuwenhoven in March 2019 proved to be a match.

Vannieuwenhoven originally also was charged with first-degree sexual assault but that was dismissed in May 2019 because the statute of limitations had passed. There are no such limitations for homicide.