Defense attorney who said his client was unlawfully indicted, spent unnecessary time in jail and was negatively impacted by a missing videotape 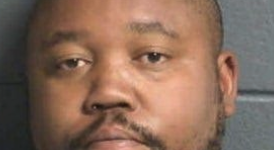 LAS CRUCES - A judge dismissed a case against a man accused of beating, robbing and attempting to sexually assault a massage parlor worker.

The case was dismissed without prejudice, meaning that prosecutors could refile the case at a later date. A hearing on Thursday featured a defense attorney who said his client was unlawfully indicted, spent unnecessary time in jail and was negatively impacted by a missing videotape that he said would exonerate him.

The accusation stems from an incident earlier this year.

Police said Larkins walked into a Las Cruces massage parlor on April 26, 2021. When a female massage worker asked Larkins if he wanted a massage, she told police that Larkins began punching her face and causing her lip to bleed.

Believing that Larkins was attempting to rob the massage parlor, the worker said she ran over to the cash register and gave Larkins the money inside. She said Larkins continued to attack her, knocking her to the floor and stomping on her leg. Police said that the attack left the worker with a broken tibia.