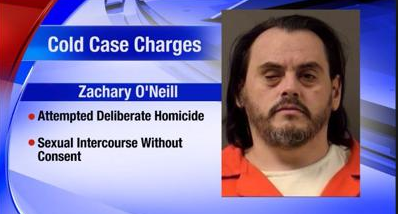 BILLINGS – A suspect has been identified and pleaded guilty to the cold-case murder of Miranda Fenner, the Laurel teenager brutally killed while working at a video store in 1998.

Yellowstone County Sheriff Mike Linder said at a press conference Tuesday afternoon that law enforcement had identified Zachary David O'Neill, who was charged in January in a separate rape and attempted murder in a Billings West End cold case, also from 1998.

Detectives Frank Fritz and Shane Bancroft have worked on the case for nearly 11 years, including conducting interviews and interrogations and using the newest DNA technology. They credited legwork and the nonstop dedication of many people to putting O'Neill behind bars.

"We all have children who have grown up in our community, who have part-time jobs at a local business. Can you imagine what the Fenners have had to go through all these years? It's bittersweet, don't get me wrong, but to get them some relief and something really makes it worth it," Bancroft said.

On the evening of Nov. 18, 1998, Fenner was found crawling out of The Movie Store, a former video store at the corner of Main Street and Fifth Avenue. She had been stabbed several times in the head and neck, and her throat had been slashed. She died at St. Vincent hospital a few hours later.

As the years passed with no suspect, the case became a national story. Fenner's family appeared on Dateline and other national news programs in an effort to find her killer.

"We wish to take this opportunity to thank everyone for their kindness and support over the last 20 years. We're relieved that there is an end in sight for the nightmare that's caused so much heartache and pain to everyone who knew and loved Miranda. Unfortunately, nothing will bring Miranda back and we can only pray that other families may be spared the grief that this type of crime inflicts. We wish to thank the Yellowstone County Sheriff's Office, the cold case unit and all the agencies and individuals involved in the investigation. Their dedication and time is greatly appreciated. We wish to thank everyone who shared our posters and signs over the years. Everyone who didn't give up and continued to search for answers. Everyone who provided so much love and support. Please understand that our family is still dealing with the recent developments in Miranda's case, and we respectfully ask for privacy at this time."

O'Neill, 39, was initially identified by Yellowstone County deputies when he confessed in 2017 to the attempted rape and murder of a newspaper carrier on the Billings West End. He was in prison in Washington state on burglary charges at the time.

He was transported to Billings and pleaded not guilty to that crime in January. O'Neill changed his plea to guilty Tuesday.

O'Neill faces charges of deliberate homicide in the Fenner case. He faces life in prison as part of a plea agreement.

A suspect has been identified and pleaded guilty to the cold-case murder of Miranda Fenner, the Laurel teenager brutally killed while working at a video store in 1998.
https://www.krtv.com/news/crime-and-courts/2019/07/24/man-pleads-guilty-to-1998-cold-case-murder-of-laurel-teenager/
Tweet
Tags:
West Coast cold case homicide dna
DOJ: Former narcotics supervisor sentenced for ste...
She Was Found Strangled in a Well, and Now She Has...