Metro narcotics sergeant charged with pocketing $5,000 in sting set up by department

Authorities says he pocketed thousands of dollars in cash during a sting set up by the department. 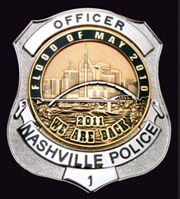 A Metro Nashville Police Department sergeant was arrested Wednesday after authorities says he pocketed thousands of dollars in cash during a sting set up by the department.

He has been employed by the police department for 16 years.

The sting was approved by Chief Steve Anderson, following a secret investigation into Dunaway by Metro police's office of professional accountability.

The investigation was initiated after a fellow officer reported observing Dunaway pocketing cash while searching a house for drugs and contraband in September, according to Metro police.

The department says Dunaway on Wednesday was observed taking more than $5,000 cash during the setup. He has been decommissioned of his police authority.

According to Metro police, Dunaway and other officers believed they were going to conduct a drug investigation at a room at a local motel. The officers were unaware that hidden around the motel room was $28,000 cash and four pounds of marijuana, which had all been placed there at Anderson's authorization.

Undercover cameras were also placed around the room. While inside, Dunaway could be seen "taking money from different locations in the room and placing it into his pocket," according to a release from Metro police.

The department reports that Dunaway took $5,860 of the $28,000. He didn't improperly handle any of the drugs, police say.

According to an arrest warrant, Dunaway admitted to taking cash during an interview with detectives.

Dunaway, as a representative of the SID narcotics unit, responded to help execute a drug search warrant Sept. 13 at a residence on Spence Enclave Way in Hermitage Precinct.

He was among the additional officers called to the scene due to the large amount of contraband found inside the house that day, including $70,000 cash, three pounds of cocaine and 11 pounds of marijuana.

A concerned officer told a department supervisor that he had seen Dunaway "take some of the cash and put it into his pocket" while processing the scene, according to the release.

In a statement Wednesday, Anderson said any "allegation of badge betrayal" that came to his attention would be investigated.