Firearms and a machete reported missing two months ago from an evidence room at the Sandusky County Courthouse have been found, or never were missing, or something. 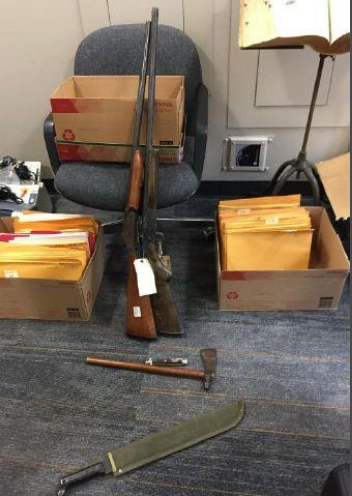 FREMONT — Firearms and a machete reported missing two months ago from an evidence room at the Sandusky County Courthouse have been found, or never were missing, or something.

In early March, court administrator Brock Kimmet said he could not locate the weapons. But on Friday, and again Monday he said he located them the day after Sandusky County Sheriff Chris Hilton asked about the missing items. Kimmet declined to say why he waited more than two months before reporting the discovery.

The Register received a CD with photos of the evidence room on the third floor showing weapons that were not there when a reporter, accompanied by the sheriff, inspected the room with Kimmet on March 7. Kimmet had no explanation at that time and he refused to respond to followup inquiries asking what court cases were connected to the missing evidence and for inventories of the evidence room.

He emailed the Register on Friday after it published a news story, "Missing guns still missing," saying the weapons were not missing.

"Nothing is missing," Kimmet wrote, offering no explanation for why he didn't remember the evidence had been moved from the third floor to an evidence room in his office, or why he had refused to disclose that he had the missing weapons.

On Monday, a Register reporter met with Kimmet and Judge Jeremiah Ray at the courthouse. They gathered what they said is all of the weapons that were taken from the third-floor room and placed in the evidence room attached to Kimmet's office — two rifles, a machete, a switchblade and a hand axe — to show the reporter.

Kimmet said he found the weapons in the evidence room attached to his office after the Register's tour of the third-floor room. He would not say why the weaponry was moved there, and again, why he wasn't aware in March that it was there.

Ray said all of the items in the third-floor room were placed in that room by the prior administration in the court.

"When we looked through it, very few items were of evidentiary value," he said. "There were items with no identification."

Ray said he thought the room was in "disarray" the first time he saw it.

The court has since padlocked the third-floor room's door and only Kimmet has access, he said. Previously, court deputies and attorneys would have also had access the third-floor room. Kimmet declined to allow a reporter to view the third floor room for a second time, offering no explantion.

"Going forward, we know nobody has access to (the room)," Kimmet said.

Ray and Kimmet said the court plans to create a destruction order for all items with "no evidentiary value."

"We'll get a detailed description of all the items (in the third-floor room) and get guidance from the prosecutor's office on a destruction order," Ray said.

Kimmet and Ray did not respond to follow-up questions on why there was no announcement for months that the missing weapons were discovered to be not missing.

They also did not explain how they were able to identify the weapons without any inventories or evidence tagging, or why the weapons were moved from the third floor to Kimmet's office.

They declined to say if there were any court orders or other court records authorizing Kimmet or anyone else to move the weapons, and also declined to answer questions about the failure to properly respond to public records requests from the Register about the missing weapons.

Missing weapons not missing? | Sandusky Register Guns, machete in the court administrator's office all along

Guns, machete in the court administrator's office all along
https://sanduskyregister.com/news/244655/missing-weapons-not-missing/
Tweet
How do you feel about this post?
Happy (0)
Love (0)
Surprised (0)
Sad (0)
Angry (0)
Tags:
missing weapon
Fayetteville Police employee fired after stealing ...
Santa Fe Police Department loses evidence in child...
Comment for this post has been locked by admin.