MOVING ON UP: Columbus Police making themselves at home in new facility

One locker is refrigerated for evidence, such as blood or urine, that needs to be kept cold. 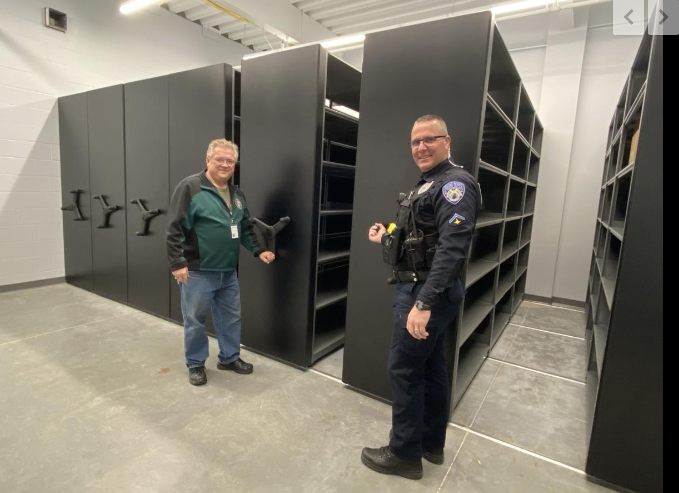 Funded by half of a $16 million bond issue approved by voters in 2018, the new facility is intended to help the department become more efficient in serving the community.

One feature the building boasts is an advanced evidence storage area. Once an officer collects evidence, the item is secured into a locker which can only be released by a technician in the next room. One locker is refrigerated for evidence, such as blood or urine, that needs to be kept cold.

A fentanyl filtered hood, which allows technicians to examine evidence containing fentanyl without being exposed to the drug, is available.

The forensic lab includes a blood drying unit, which preserves items containing blood, and a washing unit for those who may have been exposed to blood. Sherer said he plans to later install a fingerprint fuming hood.

Television shows often portray forensic analysis as being completed within a small time frame. In reality, it often takes four to six months for police to receive results.

"The more work we can do here, the less we have to rely on them (state lab)," Sherer noted. "Our community – with the size of Columbus – they (residents) expect things to be done professionally and quickly."

Following examination, evidence is then taken into the main storage room where shelves can be physically moved on tracks to save space. Evidence consisting of firearms and money are kept in a separate room.

A heated sally port is another big step up for the police department.

Previously, police department vehicles were parked outside which can lead to security issues with suspects.

"We've had several attempted escapes so this will mitigate that," Sherer said.

Per regulations set by the Occupational Safety and Health Administration, the sally port contains an eye washing station and shower head. Also in this area are the tactical gear room, vehicle supply room and washing unit for the vehicles.

Located next to the sally port are the holding cells that are intended only for the temporary detention of prisoners until they can be transported to county jail. There are two regular cells, one ADA-compliant cell and a juvenile cell with an observation window.

A restroom is available for prisoners; the toilet can only be flushed from outside of the room to prevent destruction of possible evidence.

Columbus Police officers now have an increased locker, shower and restroom space – located on the second floor - in which to prepare for their shift. The number of lockers for men and women were calculated using the national average of male and female officers, Sherer added.

Down the hall, officers have access to a kitchen and couch for those who may live out of town, as well as a fitness center.

"The City allowed us to have the room but the union either bought or solicited funding for all of the equipment," Sherer explained.

The previous gym was located in the basement of City Hall.

Also located on the second floor is an investigation area with a cyber-crimes lab, conference room for investigators, IT and polygraph rooms and offices. There is an area established for clergy who may come to visit prisoners. Sherer's office, and the office of his administrative assistant, can be found on the second floor, as well.

A training room is also situated on the second floor. It is outfitted with two televisions, a podium and sound system. The tables and chairs can be removed to make room for training mats.

"It's quite the upgrade compared to what we had," noted Officer Dale Ciboron. "There's a lot of technology to get used to."

Officer Jorge Magdaleno added that previously, the department would have to locate an area in town in which to train. The sally port, he said, is also a big improvement as it's more secure.

"It's nice to have a building specifically for what we do," Officer Jeffrey Black said.

"I think everyone's really excited to move in."

The patrol section is stationed on the first floor; the four sergeants are situated in two offices. There is a briefing room in which to hold morning meetings. Patrol officers had previously received updates in the squad cars when switching shifts.

Just before the station opened, the briefing room had already been used to implement a search warrant.

"It was the first use of this room," Sherer said. "It was extremely beneficial. We're grateful to have these accommodations to do that."

A report writing section features eight writing stations with six computer banks and two docks. One of the three televisions displays the security cameras located in the facility. The other will display computer dispatch information while the third will be tuned to a news station to stay abreast of current events.

A gun cleaning room, armory, quartermaster room (storage of excess uniforms and equipment) and K-9 office can be found on the first floor as well. The K-9 officer's workroom has tile flooring instead of carpet for easier cleaning.

There are several interview rooms, all audio and video recorded, stationed throughout the police department; one next to the detention cells, a few located near the patrol section for suspects, several "softer" rooms near the front of the building for those reporting crimes and a comfortable room for victims of assault.

The clerk's office is situated in front of the facility with a window facing out to the lobby. The lobby, along with the "soft" interview rooms and evidence review room, is the only portion of the building that the general public can access.

A bronze eagle sculpture, funded by donations, can be found looking over the lobby and out into the community.

In case of an emergency, such as an individual being chased by a stranger, the area between the first and second sets of double doors can be locked down; Sherer calls this a safety capsule. There is a phone next to the second set of double doors which a civilian can use to contact dispatch for assistance.

Additionally, there is a "Craigslist camera" in which those who purchase items through Craigslist or through social media from a stranger can complete the transaction at the west side of the building. It will also be utilized for a child custody exchange, Sherer said.

"It's a great testament to the police department and the protection they give our community," Columbus Mayor Jim Bulkley said. "I think our citizens feel very proud of the end result."

The police chief had a similar perspective.

"I'm very proud of this facility," Sherer said. "I'm very humbled by the community's support and the fact they allowed us to move into this facility. I think it's a great opportunity, and I hope they're just as pleased by the product they provide as we are being inside of it."

MOVING ON UP: Columbus Police making themselves at home in new facility | Local | columbustelegram.com