The case has been a huge embarrassment to the Michigan State Police because money was taken from the Cadillac Post's property room and he will show the post was unsecured, which gave people who shouldn't have the opportunity to be in the property room a chance to enter it. 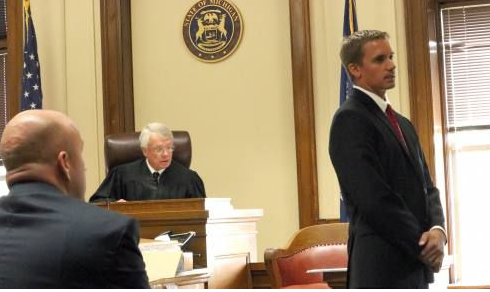 Grand Traverse County Assistant Prosecutor Kit Tholen started his opening statements by asking the jury, "What is your price?" He continued by asking them what it would cost for them to sacrifice their values, morals, integrity, and reputation.

While those things likely could not be traded for money by most people, Tholen said thieves do have a price. That price is usually driven by need, opportunity, and willingness. Over the course of the trial, which could continue through next week, Tholen said he will provide facts that show financial burdens and problems with gambling while Irwin's job as manager of the post's property room provided the opportunity.

"The first two counts (of embezzlement) will require putting some pieces together. The defendant was a career police officer," Tholen said. "You will not see a smoking gun. You will not see him on camera putting all the money in his arms and walking out. A career police officer will not take the money with an eyewitness watching. It will require putting all those pieces together like a puzzle."

For defense counsel Stephen King, he started his opening statements with stating, "Malcolm Irwin did not take the money."

He said the case has been a huge embarrassment to the Michigan State Police because money was taken from the Cadillac Post's property room and he will show the post was unsecured, which gave people who shouldn't have the opportunity to be in the property room a chance to enter it.

He told the jury he would show there were more than 40 people who had access to the post after hours and at least 12 people had keys to the evidence room. He also said there was nothing that would deter that evidence room key from being copied at any business where keys could be made.

King also told the jury during the trial he will show them the door to the evidence room didn't always close and latch and how the drawer in the filing cabinet where the missing money was taken was clearly marked with the word "Money." He also told the jury he would show that the key to unlock that filing cabinet was simply placed on top of it. He also said while there were others who could have been investigated, only Irwin was focused on.

Irwin was charged last November with embezzlement by a public official over $50 and embezzlement by an agent or trustee of $1,000 or more but less than $20,000. He also faces charges of police officer resist, obstruct, opposing or endangering and felony firearms. Court records indicate the theft occurred between Dec. 1, 2012, and March 18, 2014, in Cadillac.

He faces up to 10 years or a $5,000 fine on the first embezzlement charge and up to five years and/or $10,000 fines or three times the amount embezzled, whichever is greater on the second charge.

Grand Traverse County Prosecutor Bob Cooney made the announcement of Irwin's arrest via press release. He was assigned to the case as a special prosecutor, and in June 2016, he said he wanted to make sure he had all his "I's" dotted and "T's" crossed before he came forward with the charges.

The charges were issued after a lengthy investigation beginning in March 2014, when the money was discovered to be missing. Because the theft occurred in Cadillac, the case was originally submitted to the Wexford County Prosecutor's Office, but the Michigan Attorney General assigned the case to the Grand Traverse County prosecutor due to a potential conflict of interest. Cooney was appointed in January 2015.

The charges stemmed from an incident on March 18, 2014, which was reported to Cadillac post commander F/Lt. David Street. About $9,600 was missing from the post property room, and a subsequent search and audit confirmed the money had been stolen. Detectives from the MSP 6th District Special Investigation Unit were assigned to investigate the larceny. At the time, Irwin was the sergeant in charge of the evidence room.