According to confidential police sources, the Sergeant unknowingly recorded himself on duty last month. It shows him enter his private office at the police station, grab what appears to be marijuana, then drive to his girlfriend's house. 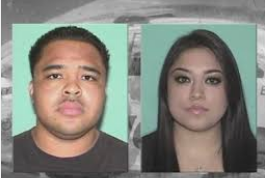 The Sergeant, 33-year-old Roshern McKinney, is accused of giving his girlfriend, 23-year-old Tanicka Gallegos-Gonzales, marijuana he took from the Grants Police Station.

"In reference to Sergeant McKinney, when this situation was brought to my attention, I contacted two outside agencies to conduct concurrent but separate investigations," said Grants Police Chief, Craig Vandiver.

What tipped off the police chief: Sergeant McKinney's own lapel camera.

According to confidential police sources, the Sergeant unknowingly recorded himself on duty last month. It shows him enter his private office at the police station, grab what appears to be marijuana, then drive to his girlfriend's house.

At her house, the Sergeant is recorded saying he's giving her marijuana for her father. Sources tell KRQE News 13 the lapel then shows the Sergeant's girlfriend on his lap while he fondles her.

"The situation is still an active and ongoing personnel matter," said Chief Vandiver.

Through the investigation, the Sergeant is also accused of two other crimes while on duty, stealing marijuana along with close to $800 that was supposed to be submitted as evidence.

"The employee has rights, and until the investigation and personnel matters are closed, I cannot discuss it further," said Chief Vandiver. "When the personnel matter is resolved, I'll be able to make a further statement regarding this matter."

McKinney's girlfriend was also arrested for conspiracy and distribution of marijuana. Both are booked at the Sandoval County Detention Center.

Albuquerque’s source for local news and live streaming video online. KRQE reports on news, weather, traffic, investigations and sports for New Mexico.
http://krqe.com/2016/08/24/new-mexico-sergeant-arrested-after-lapel-camera-investigation/
Tweet
How do you feel about this post?
Happy (0)
Love (0)
Surprised (0)
Sad (0)
Angry (0)
Rape Survivors Are Suing to Have Their Rape Kits P...
Braintree deputy police chief is placed on leave i...
Comment for this post has been locked by admin.