Rape Survivors Are Suing to Have Their Rape Kits Processed

Marlowe isn't alone. An estimated 400,000 untested rape kits languish nationwide, according to the US Department of Justice. Now, Marlowe and other rape survivors like her are turning to the courts, claiming that cities that ignore potential DNA evidence are
violating survivors' civil rights. 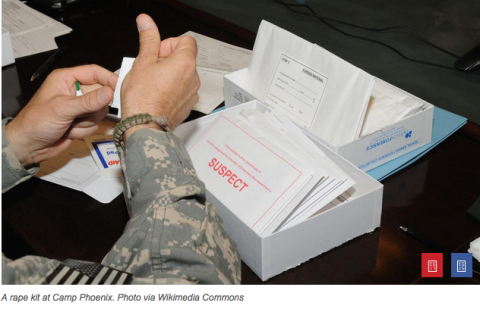 Heather Marlowe was raped at a party in May 2010, during the city's popular Bay to Breakers footrace. She reported the assault and subjected herself to the four-hour forensic examination, which produces a cache of evidence commonly known as a rape kit. Kits can include semen, hair, and skin cells from the attacker, all of which can be used to identify a suspect. But the San Francisco police didn't test her kit for more than two years—and today, they still haven't managed to catch her attacker.

Marlowe isn't alone. An estimated 400,000 untested rape kits languish nationwide, according to the US Department of Justice. Now, Marlowe and other rape survivors like her are turning to the courts, claiming that cities that ignore potential DNA evidence are violating survivors' civil rights.

Marlowe sued the city in federal court in January, claiming those delays violated her constitutional right to equal protection and due process. She recently expanded her suit, arguing that the San Francisco Police Department's handling of sexual assault cases is part of a larger pattern of discrimination against women who file sexual assault reports that infringes female survivors' right to equal protection. Later this week, San Francisco will argue in court that Marlowe's case should be thrown out—the first significant hearing since she sued in January.

Under California's Sexual Assault Victims' DNA Bill of Rights, police must test any DNA evidence from a sexual assault, develop a suspect profile, and upload the information to the Federal Bureau of Investigation's Combined DNA Index System—or CODIS, a national database of offender DNA—within 14 days.

"The 14 days that it was supposed to take for my kit to be processed turned into 868 days," Marlowe told the San Francisco Police Commission during a meeting in 2013. "I got to a point where following up [and] trying to attain any information was becoming very frustrating and re-traumatizing, because I was continually being told that my kit was not a priority."

Rape kits have been around since the 1970s. They can be remarkably effective in identifying suspects; a 2009 Justice System Journal study found that rape investigations involving forensic evidence were 24 times more likely to produce an arrest. Another study from 2016 found that in Detroit, Michigan, 900 previously untested rape kits led to 259 hits in the DNA database, 69 of which were serial rapists.

When sexual assault victims consent to a rape kit, they agree to preserve as much evidence from the assault as possible. They're discouraged from eating or drinking anything, going to the bathroom, or taking a much-wanted shower. Rape kit evidence can be collected up to five days after an assault, and survivors may have to travel for hours to reach a hospital where nurses have been trained to collect forensic evidence. Their bodies are living crime scenes, and collecting evidence from them is necessarily invasive. All these factors can make survivors reluctant to submit to go through with it.

Marlowe spent years thinking her rape kit hadn't been tested, and only discovered this year—as a result of the litigation—that it was processed in 2012. However, investigators said her kit contained insufficient DNA markers of her assailant to be checked against the national DNA database.

The San Francisco City attorney's office didn't respond to a request for comment on why Marlowe's kit went untested for more than two years and why it didn't contain sufficient evidence.

The city argued in its court filings that the San Francisco Police Department asked its crime lab several times in 2010 to test Marlowe's kit, but that no law required testing within a particular period of time.

A 2014 San Francisco audit revealed that the city, like many across the country, was storing thousands of untested rape kits dating as far back as the 1980s. Marlowe argues that the city's heap of untested rape kits shows that other women are treated similarly, creating the foundation for her claim that San Francisco Police's attitude toward sexual assault investigations violates women's equal protection rights.

The city has argued in court filings that Marlowe can't prove it has treated rape kits from males any differently, but hasn't said how many of its rape kits come from men. But Marlowe's attorney, Alexander Zalkin, told me that the city's argument doesn't hold water. "The statistics show that 90 percent of sexual or rape crimes are against women. When you take a step back, this is almost universally affecting women."

In the 1990s, survivors of domestic violence began filing lawsuits alleging that when police failed to respond to their cases, they violated women's civil rights.

"That set a precedent that equal protection claims could be brought, so long as you could show it was a bias against women," Park told me. "That case law has carried over into current times."

Marlowe is not the first to take a stab at applying those legal tactics to crimes that largely affect women. A trio of Jane Does sued the town of Harvey, Illinois, in 2012, saying Harvey police had violated victims' civil rights by failing to make use of available DNA evidence.

And in Memphis, Tennessee, three women and girls—all assaulted by the same serial rapist, who operated for at least a decade—claimed in 2014 that the city's failure to test their rape kits flouted the Constitution. Memphis police, investigating the rapes of girls as young as 16 and 12, regularly focused on the supposed falsity of their reports and didn't take them seriously, according to their lawsuit.

Their rapist, Anthony Alliano, ultimately pleaded guilty and was sentenced to 178 years in prison. He was only caught after using a credit card stolen from one of his victims.

In Harvey, "It seemed like the department was not only in shambles, but actively resisting investigation of those cases," Park says.

In Harvey, federal judge Sharon Coleman ruled in 2015 that "if true, the facts alleged are alarming," but that the women hadn't shown police treated them differently than male rape survivors. She also ruled that former Harvey police chief Andrew Joshua was immune from the constitutional claims. The plaintiffs reached a settlement with the city last year.

The Memphis plaintiffs voluntarily dismissed their civil rights suit in late 2014, opting to sue in state court instead.

"In many departments, whether it's a formal policy or longstanding practice, [that evidence requirement] would be satisfied," Park says. For example, when the National Institute of Justice investigated Detroit's rape-kit backlog, it found that officers had made biased comments against the victims in their reports. Those comments led rape kits to remain untested, she said.

Marlowe claims a San Francisco police officer made biased comments to her, including that because she was a woman who "weighs less than men" and has "menstruations," she "should not have been out partying with the rest of the city on the day she was drugged, kidnapped, and forcibly raped."

San Francisco, like other cities that have been targeted, has argued in court filings that the Constitution doesn't provide this kind of justice for crime victims.

"[The Constitution] doesn't require an investigation, or any specific type of investigation," Deputy San Francisco City Attorney Margaret Baumgartner told me. "This isn't a constitutional issue."

While other Constitution-based suits so far haven't succeeded, Zalkin believes Marlowe's suit has a better chance of winning.

"We certainly have enough to show there's an equal protection violation here," he said. "If we are successful, governments are going to have to think twice if they decide not to test these rape kits, or store them for years at a time. The hope is that this will effectuate some change on a policy level, on a national level."