O.C. Sheriff had investigator probe into evidence mishandling even though he had mishandled evidence 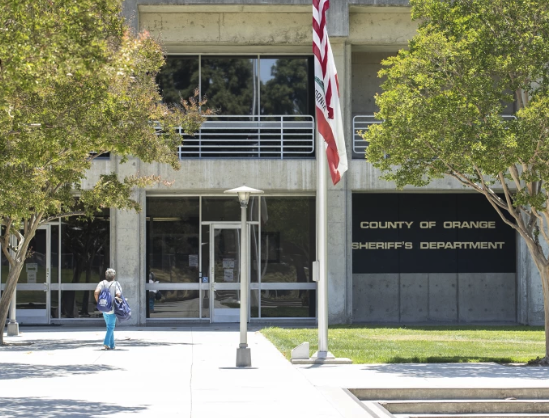 Even after the Orange County Sheriff's Department discovered one of its investigators mishandled evidence and lied about it, the department still tasked him with probing into widespread evidence mishandling of his peers, according to a recent court motion.

Assistant Public Defender Scott Sanders alleges in his motion that the Sheriff's Department then tried to conceal information from the district attorney's office to lessen the chances that Det. Matthew LeFlore would be prosecuted.

LeFlore is one of the subjects of the widely reported evidence mishandling scandal, where Orange County sheriff's deputies were found to have booked evidence late or failed to book evidence at all but subsequently lied about it in reports. For more than a year, Sanders has been revealing details about the scandal in court filings critical of the Sheriff's Department and the district attorney's response to the scandal.

Before the scandal was brought to light by an Orange County Register article in late 2019, the Sheriff's Department conducted two secret audits of the evidence mishandling. LeFlore was chosen by the department along with a handful of others to take part in the investigations. A third audit conducted by the district attorney's office earlier this year led to 67 charges being dropped or reduced.

In his motion, Sanders says LeFlore had booked evidence late on several occasions and wrote five reports where he lied about when he booked evidence. The motion says the Sheriff's Department was aware of LeFlore's evidence mishandling misconduct before choosing him for the audit.

The Sheriff's Department later investigated LeFlore's misconduct and referred him to the district attorney's office for potential criminal prosecution along with 16 others for evidence mishandling. Yet according to the motion, the department withheld important information from the district attorney's office, including the five reports in which LeFlore lied about booking evidence when he hadn't. Sanders points out in his motion that this type of information was included in the reports of the other Sheriff's Department personnel who were investigated.

"In hindsight, the 'investigation' and referral of LeFlore was likely only ordered because of concerns that the failure to act would raise potential complaints of disparate treatment ..." the motion says. "A comparison of the investigation of LeFlore with others carried out by the same investigators makes it abundantly clear that there were very different objectives when it came to LeFlore.

"... The omission from the internal criminal report of other instances of evidence-related conduct by LeFlore was clearly designed to control the process and help deliver impunity for a member of the agency who seemingly should have been held to a higher standard, considering he was engaged in this behavior after investigating others for the same class of misconduct."

Initially, the district attorney's office declined to prosecute any of the sheriff's personnel who were referred but later reopened some of the cases. Sanders has maintained that this was done only after the issue was publicly exposed.

Eventually, at least 16 of the members were placed on the district attorney's Brady List, a record that district attorney's offices are supposed to update with the names of law enforcement personnel who have records of dishonesty, criminality and other issues that could affect their credibility as a witness. The motion says that LeFlore is on the Brady List.

The motion says the only case included in the Sheriff's Department's referral of LeFlore to the district attorney's office was a case in July 2018, following his work on the evidence mishandling audits. LeFlore collected gun ammunition, methamphetamine, narcotics and a pair of boots while responding to a case and failed to book the items or write up a report on them. Instead, about two weeks later, he left the boots on a counter, with the drugs and pipes inside the shoes, in a Sheriff's Department station with a note that said, "Free."

"The timelines and assumptions made by the Public Defender's motion are wrong and serve to purposefully mislead," Sheriff Don Barnes said in an emailed statement. "We trust that the court and the public will see this as a blatant disregard for facts and focus on the criminal actions by the public defender's client in court, and not try a case through the media."

Through the motion, Sanders is seeking reports and other evidence that the sheriff's personnel involved in the case of his client, Brittany Shabakhti, falsely claimed to have booked evidence in past cases, lied about when they booked evidence or violated sheriff's policy dictating when evidence is required to be booked. LeFlore is a detective on Shabakhti's case, which involves drug- and gun-related charges.

In the motion, Sanders also says LeFlore improperly recorded and listened to private calls between a defendant and his attorney. For a three-year period, the telephone vendor the county contracts with for its jails recorded thousands of calls between inmates and their attorneys.

Sanders is also seeking further information from the department on sheriff's investigator Arthur Tiscareno, a key witness in Shabakhti's case. Tiscareno was promoted to investigator even though he booked evidence late 44 separate times after lying that he had already booked the evidence, the motion says.

"It remains unclear why Tiscareno was never added to the 17 who were submitted for potential prosecution, as his conduct rivals that of the worst offenders who emerged from the First Audit," the motion says.

In his motion, Sanders also describes the promotions of two other sheriff's personnel. Although neither Victor Valdez or Philip Avalos are involved in Shabakhti's case, they demonstrate, similarly to LeFlore, that the department gives special treatment to certain members, Sanders said over the phone.

"When you're engaging in this favoritism and special treatment, we can't trust you in what you're turning over to us," Sanders said.

Sanders contends that the Sheriff's Department waited until after a Grand Jury report was published to promote current Sgt. Victor Valdez, who allegedly engaged in a sexual relationship with a female informant with a heroin addiction, secretly recorded phone conversations with prosecutors and failed to book recorded interviews with suspects and witnesses.

"That would not seem to be in most places a good basis for career advancement," Sanders said over the phone.

In his motion, Sanders said that "leadership waited until the ink on the Grand Jury Report had dried and the public's appetite for the issues appeared to dissipate."

Valdez was partners with Avalos, who was also promoted by the department despite filing evidence late in a majority of his cases.

"These objectively unjustifiable promotions to leadership positions eviscerate the notion that the OCSD is authentically trying to 'change the culture and restore trust and confidence,'" the motion says, quoting the Grand Jury report.

The Sheriff's Department disputes the claims.

"The Sheriff's Department has a proven track record of fully cooperating with the Grand Jury's investigations," Blashaw said. "Personnel promotions are not timed to coincide with any report from the O.C. Grand Jury. Employee promotions are a competitive and objective process. In order to compete for a promotion, employee disciplinary incidents must be fully adjudicated."

O.C. Sheriff had investigator probe into evidence mishandling even though he had mishandled evidence - Los Angeles Times

Even after the Orange County Sheriff's Department discovered one of its investigators mishandled evidence and lied about it, the department still assigned him to a group tasked with probing into widespread evidence mishandling, according to a recent court motion.
https://www.latimes.com/socal/daily-pilot/entertainment/story/2021-06-30/sanders-sheriff-investigator-probe-mishandled-evidence
Tweet
Tags:
mishandled evidence West Coast
Former Altoona police officer pleads guilty to ste...
Legislation to increase sexual assault kit regulat...