The evidence custodian admitted to smashing drug paraphernalia with a hammer. 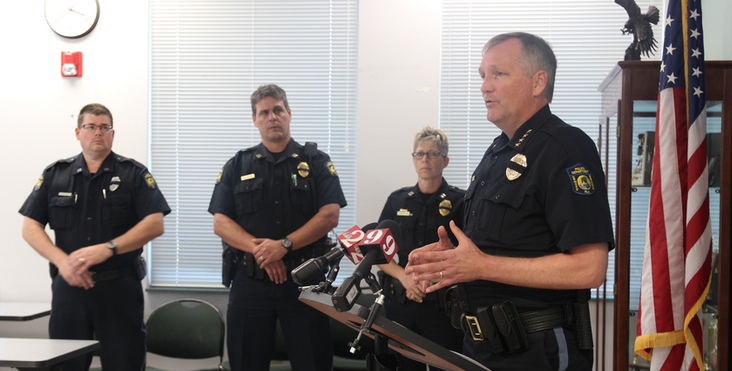 Following a five-month investigation over 185 discrepancies in the Ormond Beach Police Department's evidence department, one employee has been fired and two others recommended for counsel, said Police Chief Jesse Godfrey during a press conference on Tuesday, April 24.

The investigation began on September 21, 2017 when OBPD Capt. Lisa Rosenthal conducted an audit of evidence items scheduled for destruction and discovered a Suboxone strip, a narcotic used as a painkiller, was missing. Four days later, Evidence Custodian Marylyn Dance was placed on administrative leave. She was first hired in August of 2013.

For the months that followed, the Florida Department of Law Enforcement conducted a criminal investigation and OBPD Capt. Chris Roos performed a complete inventory of the Evidence and Property Unit.

"We found a problem," Godfrey said. "We addressed it and we're moving forward like we do in the police world. When something bad happens, you can't change it, you just got to go forward and take those necessary precautions so it doesn't happen again."

Of the 185 discrepancies, 123 items were missing, including an antique firearm, narcotics and drug paraphernalia, the latter of which Dance admitted to personally smashing with a hammer or assigning someone to do it instead. She also admitted to throwing them away. State Statute requires these items be burned by court order.

During a taped interview, Dance to Criminal Investigations Unit Sergeant Thomas Elkin that Godfrey, who was a lieutenant at the time of the alleged conversation, told her that destroying the drug paraphernalia sounded like "a good idea." Godfrey denies this allegation.

Drug tests on Dance and the other two employees came back negative. Godfrey said he believes the destruction of evidence was due to "shoddy" work on Dance's part.

"The three words that a police chief doesn't want to hear from their evidence custodian is 'I don't know' when asked where the stuff went and what happened," Godfrey said.

OBPD's investigation is ongoing, and Godfrey said they are making changes to their disposal process as they go along, such as adding more cameras, documentations and strengthening their policies.

"It's a work in progress and we're just adding safeguards as we go because we don't want to see this happen," Public Information Officer Keith Walker said.

The evidence custodian admitted to smashing drug paraphernalia with a hammer.
https://www.ormondbeachobserver.com/article/obpd-evidence-custodian-fired-after-internal-investigation-uncovered-185-discrepancies-in-evidence
Tweet
How do you feel about this post?
Happy (0)
Love (1)
Surprised (0)
Sad (0)
Angry (0)
Tags:
evidence department
Arrest made in 16-year-old Athens murder case
Connecticut Man Exonerated After Serving 16 Years ...
Comment for this post has been locked by admin.