A Denver police officer has been arrested, accused of stealing money from a suspect. His body camera apparently caught him taking the cash from a crime scene. 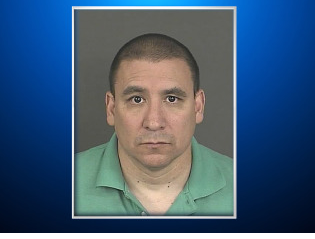 DENVER (CBS4)– A Denver police officer has been arrested, accused of stealing money from a suspect. His body camera apparently caught him taking the cash from a crime scene.

Officer Julian Archuleta was arrested on Friday for investigation of misdemeanor theft, first-degree official misconduct and tampering with physical evidence.

The arrest stems from an arrest Archuleta was involved in on Oct. 7. Officers, including Archuleta, were called to the area of West 50th Avenue and North Washington Street to cover additional officers on a shots fired call.

Officers were involved in a short pursuit that ended with a single car rollover accident at West 50th Avenue and North Washington Street. The driver took off running and the passenger was unconscious in the vehicle.

Archuleta assisted with taking photographs of the scene, which included the passenger, vehicle and a handgun inside the vehicle.

Archuleta was wearing a body camera during the time he searched the suspect's clothing after it was removed by paramedics on the scene. An unknown amount of cash was discovered and placed on the front passenger seat of the suspect vehicle.

According to a police report, one stack of bills was observed and contained a $100 bill on the outside of the stack. Archuleta was seen separating the $100 bill along with some other bills folded inside the $100 bill, from a stack with a $1 bill on top.

A search warrant is obtained for the suspect vehicle and investigators recover $118 in cash from the front passenger seat, including one $50 bill, two $20 bills, one $5 bill, six $2 bills and 11 $1 bills. There were no $100 bills recovered from the crime lab. The cash, suspected narcotics, firearm and other items were placed into evidence.

While an officer reviewed the body camera video from Archuleta, he observed the $100 bill and realizes it was not collected at the scene by the crime lab and it was not checked in as evidence.

According to police, Archuleta also made no mention of the cash in his written statement. The officer notifies internal affairs.

Archuleta turned over the money but declined to make a statement.

Archuleta, with the police department since 2004, was arrested on Friday and booked into the Denver City Jail. He has also been suspended without pay pending the outcome of the investigation.