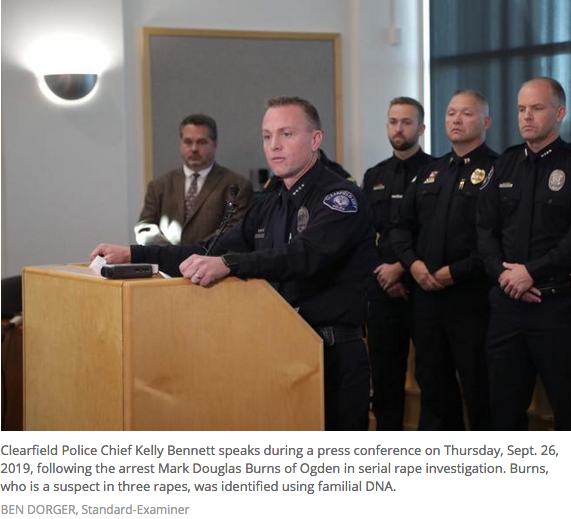 "I'm excited," said Jay Henry, state crime lab director. "We might be on the cusp of a new revolution in forensic genealogy, the next big leap."

After obtaining DNA samples from large databases that are open to public access, authorities have tracked down offenders by building genetic family trees that hone in on possible suspects with matches to crime scene DNA.

Investigators employed the method in at least three recent Utah cases, including the Sept. 25 arrest of an Ogden long-haul trucker in a series of rapes in Utah and Wyoming two and three decades ago.

"Every crime lab in this country is trying to figure out how to use this," Henry said. "It's awesome. We are solving cases left and right."

He said St. George police this year secured what may have been the nation's first conviction on a new case, not just cold cases.

But civil libertarians are raising alarms. They fear privacy violations that would be common in a police state.

"They want to catch bad guys," Libertas Institute President Connor Boyack said of law enforcement. "Everybody wants to catch bad guys. But the other competing priority is people's right to privacy."

In a given case, employing genetic genealogy to comb public databases for links to crime scene DNA samples exposes dozens of relatives who have not given their consent to have their personal information surrendered to law enforcement without a judge's review, Boyack said.

"In a surveillance state you could catch a lot more bad guys — rapists, murderers and the rest — if we as a society elect to abandon all notion of privacy, but that is not the American way," Boyack said.

"People are presumed innocent until proven guilty and we have a right to privacy that can only be breached if we are individually suspected of a crime," he said.

Libertas will propose legislation in 2020 to address the concerns, although Boyack said details are not decided.

"This is a new technology and there is no state that regulates it," Boyack said. "Therefore law enforcement is in this wild, wild West — I should say understandably so if I'm in their shoes. I can see how tempting the opportunity is to use this new tool to solve cases."

Henry questioned whether a privacy crisis is coming."I'm not sure if I see that," Henry said.

Boyack said part of the problem is that some DNA database companies have not been protective of the information and privacy expectations of people contributing their DNA have not been met.

But if companies disclose that law enforcement may acquire DNA, privacy concerns are dispelled, Henry said.

"If they're being up front with people, I don't see how that really is an invasion of everybody's privacy," he said. "People are so willing to share their profiles ... people are interested in helping solve crime — they're wanting to do it. That really gives me a good feeling."

In the Clearfield case, a genetic genealogist, starting with the DNA taken from rape victims in Utah and Wyoming, was able to tap into public databases to zero in on a half brother of the eventual arrestee.

The half brother was eliminated as a suspect, then Clearfield police got new DNA samples from the household trash of truck driver Mark Douglas Burns, 69, of Ogden. That DNA matched that from the crime scenes, police said.

"Everybody has to remember this is an investigative tool you won't typically see in court," Henry said. "We are looking at DNA and trying to associate it with people that way. In the end, what you're going to have is the crime scene sample and a lawfully collected sample from a suspect, so that is what is going to go to court."

Centerville police in April arrested a teenager on charges of beating a church organist while she was alone in the building. Investigators used the open database method to zero in on the teen.

And after a similar investigation in St. George, investigators secured a guilty plea to a first-degree felony object-rape charge against a man who assaulted a 79-year-old woman in her home.

In February, Spencer Glen Monnett was sentenced to five years to life in prison.

The Clearfield suspect, Burns, is held without bail in the Davis County Jail. His attorney, Colleen Coebergh, declined to comment on the case.

Genetic genealogist Dr. Barbara Rae-Venter, who helped break the Golden State killer case, did the DNA sleuthing for Clearfield police. The public DNA came from Family Tree DNA, which allows police access for murder and sexual assault investigations involving users who have not opted out of law enforcement access.

"There was no warrant, to our knowledge, no notice to family members who are connected of that DNA profile," Boyack said. "There is no regulation governing how this process could play out."

Genetic genealogy "is a completely different animal than other law enforcement investigative tools," he said. "Fingerprinting, retinal scans and other types of biometric information are tied only to the suspected person."

In the Legislature, Libertas will advocate creation of a framework that protects privacy rights, "and only then can law enforcement access this information," Boyack said. "Fundamentally this is about making sure a judge is involved."

Henry, meanwhile, thinks Utah is a good place for genetic genealogy to flourish.

"The thing about Utah is that it's really into family history," he said. "This could be a very valuable open source database to help solve future crimes."

Utah police investigators and forensic scientists are among the national leaders in the use of genetic genealogy to crack old and new criminal cases.
https://www.heraldextra.com/news/local/govt-and-politics/legislature/open-source-dna-an-unprecedented-crime-buster-or-privacy-nightmare/article_99944255-abb6-522b-96c7-e1a9f84521a4.html
Tweet
How do you feel about this post?
Happy (0)
Love (0)
Surprised (0)
Sad (0)
Angry (0)
Tags:
West Coast genetic genealogy
Arrest Made In Anaheim Cold Case Murder
After 50 years and a Facebook post, lost class rin...