Police Department paid for a bio-hazard remediation team from Trauma Services LLC, based in Mansfield, to decontaminate the vehicle, due to the substance's extreme potency. 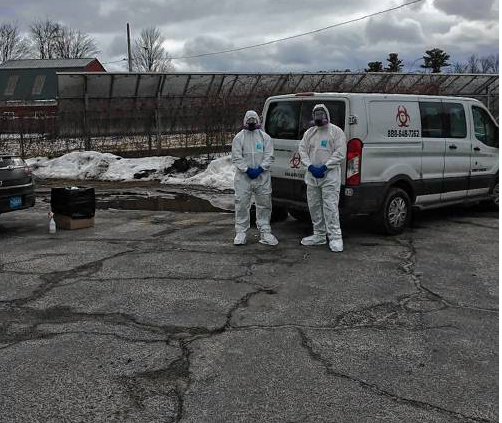 ORANGE — A police cruiser was contaminated with fentanyl following an arrest in Orange.

A person arrested Monday tried to conceal fentanyl, which ended up "exposing officers and contaminating one of our cruisers," according to a post on the Orange Police Department's Facebook page late Tuesday afternoon.

Tuesday, the Police Department paid for a bio-hazard remediation team from Trauma Services LLC, based in Mansfield, to decontaminate the vehicle, due to the substance's extreme potency.

Fentanyl is a synthetic opioid that is 80 to 100 times stronger than morphine, and is sometimes added to heroin to increase the drug's potency, according to police.

Exposure to even small amounts of fentanyl can be "quick, and in the right circumstances, deadly. It is a very dangerous thing to come in contact with," the post reads. "If a dog sniffs a bit of powdered fentanyl, the size of a poppy seed, it can kill them."

The Orange Police Department noted that such incidents are often thought of as an urban phenomenon, but can happen in rural areas, too, putting both drivers and passengers of the contaminated cruiser at risk.

"Not only are officers in the cruisers, but we also transport prisoners, victims of crimes, families involved in accidents and the occasional runaway K-9," the post reads. "We can't take a chance that we give your child or your puppy a ride and inadvertently expose them to this dangerous drug."

Law enforcement officers across the country have seen a spike in recent years in the prevalence of fentanyl abuse and fentanyl-heroin mixes, leading to agencies exercising extra caution when possibly dealing with the substance, according to Associated Press articles.

Last June, several Easthampton police officers were taken to the hospital after becoming ill following fentanyl exposure. And, in September, four police officers in Wilmington were hospitalized after coming into contact with fentanyl on a man they were arresting.

Even more recently, in December a K-9 police dog with the police department in Smithfield, R.I., had to be treated with the opioid overdose reversal medication naloxone — commonly known as Narcan — after its heart rate dropped to dangerously low levels following a drug bust.

No further information is available at this time. The Greenfield Recorder will be running a follow-up article about this incident.

ORANGE — A police cruiser was contaminated with fentanyl following an arrest in Orange.A person arrested Monday tried to conceal fentanyl, which ended up “exposing officers and contaminating one of our cruisers,” according to a post on the Orange...
https://www.recorder.com/Orange-fentanyl-contamination-32314977
Tweet
How do you feel about this post?
Happy (0)
Love (0)
Surprised (0)
Sad (0)
Angry (0)
Tags:
cruiser contaminated fentanyl East Coast
Internal audit of Minneapolis rape kit backlog hig...
Documents: $4,000 in military surplus misplaced in...