In April 2016, the crime lab confirmed a blood stain on the shirt matched a man's DNA. 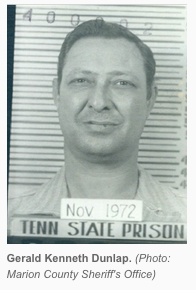 More than 38 years after Janie Landers was brutally stabbed and beaten to death, an Oregon State Police detective was finally able to return a pair of earrings to her family and deliver the news they'd long waited to hear: He knew who killed the 18-year-old Salem woman.

"I'm really grateful and relieved that it's done," said Landers' sisterJoyce Hooper. "She can be totally at peace now because her case is solved."

Landers was a patient at Fairview Training Center when she went missing March 9, 1979. Functioning at the level of an 8-year-old, Landers struggled with learning challenges and behavioral issues that led to her residency at the now-closed state-run facility in Salem.

Although some suspected Landers voluntarily walked away from the center, police still investigated her disappearance and spoke with the four employees who last saw Landers alive.

They had spotted an unfamiliar man in the area and his yellow or gold-colored vehicle. According to one witness, a large, pot-bellied man parked his car and crossed the street to talk to Landers.

The four witnesses worked with a Statesman Journal employee, who drew a composite sketch of the man.

Five days after her disappearance, Landers' body was found along a path near Silver Creek Falls State Park.

An autopsy revealed she died from blunt force trauma to the head. She had multiple defensive wounds and deep cuts on her neck. An examination of her stomach contents led investigators to believe she died the day of her disappearance.

Hooper was just 13 when her sister was killed. She doggedly followed the investigation and urged detectives to reopen the case.

Every few years, the investigation would be revived. Witnesses were re-interviewed, crime scene photos were re-examined and investigators would flip through stacks of police reports.

A clear suspect or theory of why Landers was killed never emerged.

Fast forward to March 2015, when Hooper again asked Oregon State Police to resurrect the investigation. She was 50; her father 82. She hoped to find justice for her sister while her father was still alive.

The case landed with OSP Detective Steve Hinkle, who began pouring over hundreds of pages of police reports. He spoke with previous investigators and contacted any witnesses who were still alive.

At 5-feet-1-inch tall and 105 pounds, Landers was petite, but had a reputation for being feisty and unexpectedly strong.

Due to the nature of the brutal attack, Hinkle suspected her killer may have been injured during the stabbing.

"Janie clearly fought for her life," investigators had noted.

The wounds were likely caused by a knife without a hilt, meaning her killer may have cut his hand while handling the weapon.

State police crime lab forensic scientists and detectives re-examined Landers' shirt and were able to find sections that might contain her killer's DNA. In April 2016, the crime lab confirmed a blood stain on the shirt matched a man's DNA.

Investigators soon discovered not only the man's identity — Gerald Kenneth Dunlap — but also his violent and predatory criminal past.

He had been convicted of raping a woman during an armed robbery in Tennessee in 1961 and sentenced to life in prison. He was paroled 12 years later.

Dunlap first moved to California where he was forced to register as a sex offender, then to Oregon, which at the time had no requirement for sex offender registration.

He married and soon found employment — at the Fairview Training Center.

Dunlap had not previously been identified as a suspect in Landers' murder. He worked as a laundry employee at the center until 1983, when he was fired for inappropriate behavior toward women.

District attorney's officials said at the time of Dunlap's hiring, nationwide criminal records were not reliable or common. Dunlap's coworkers likely would not have known about his violent past unless he'd self-reported.

In 1996, Dunlap was arrested for sexually abusing a minor female family member. Then-Deputy District Attorney Walt Beglau prosecuted Dunlap, who was found guilty by a Marion County jury and sentenced to prison.

But because he was convicted of a felony sex crime, Dunlap had been required to submit his DNA, which was still on file.

Detective wanted to be sure

The DNA match made Dunlap a strong suspect, prosecutors said, but Hinkle kept working to cement the connection and close the case.

Because Fairview closed in 2000, employee records were difficult to track down. The detective was able to find payroll records confirming that Dunlap was working at the training center the day Landers disappeared.

His job sorting laundry prior to washing made it highly improbable that his DNA could have transferred accidentally onto Landers' clothing and survived the washing process.

Tracking down old photos of Dunlap also proved difficult. The Tennesse Department of Corrections provided detectives with two mugshots of Dunlap taken right before he was paroled. When the detectives compared the photos with the 1979 composite sketch, the resemblance was clear, prosecutors said.

Two of the four witnesses who saw Landers' the day she disappeared were still alive and able to help with a photo line-up.

Both witnesses picked the photo of Dunlap out of five other similar-looking men. Although they weren't 100 percent certain, they noted that he looked like a man they saw talking to Landers before she went missing.

Dunlap's former co-workers recalled that he would often leave work early, loiter near the bus stop near Fairview and offer patients rides.

Dunlap's widow and step-son said he drove a car similar to the one seen by witnesses the day Landers was killed. His step-son also said he and Dunlap hiked in the Silver Creek Falls area where Landers' body was found.

They determined Dunlap was solely responsible for Landers' murder.

Prosecutors theorized that her small stature made her "the perfect target for a sexual predator like Gerald Dunlap."

They added that Dunlap, then 43, likely offered Landers a ride then threatened her with a knife and attempted to sexually assault her.

"Janie's unexpected level of strength and resistance, however, would have both surprised and frustrated Dunlap who resorted to killing her when his sexual attack was thwarted," prosecutors said.

Dunlap's 5-feet-10-inch, 190-pound and murderous rage ultimately overpowered his victim. He stabbed Landers repeatedly and beat her to death.

Had he been alive today, he would be charged with murder, Clarkson said.

She said the case never would've been solved without the "persistence of a little sister who never forgot," the dedicated work of detective and the courage of the 1996 victim to report her abuser and endure the trial.

"It is because of her that Dunlap could never hurt anyone again and, most importantly for this case, his DNA was on file," Clarkson said.

On Monday, Hinkle was able to return Landers' belongings to her family. He presented Hooper, now 52, and her father Richard Landers, 84, with a pair of earrings and two small hair ties.

"It's not much. But it represents the end to this case," Hinkle said. "We're grateful we could do this for Janie. We're hopeful her family can find closure to this horrific chapter of their lives."