This unit has the potential to save the police department thousands
of dollars that would have been spent to dispose of this evidence using
other methods. 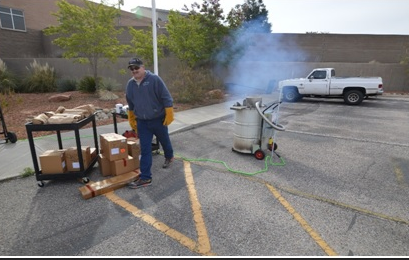 The Page Police Department tried out its new 'burn barrel' for the first time this week.

The barrel is used to dispose of evidence and other property stored in our evidence room that cannot be released and has been authorized for destruction. The unit, an Elastec Drug Terminator cyclonic burn barrel, cost $3,420. The Board of Directors for the Northern Arizona Street Crimes Task Force approved a motion to award the Page Police Department the full amount to purchase the unit.

This unit has the potential to save the police department thousands of dollars that would have been spent to dispose of this evidence using other methods.

When the barrel was purchased, the department had 110 items of marijuana evidence, 77 items of dangerous drug evidence, 62 items of drug paraphernalia, 5 syringes, and 15 blood kits awaiting destruction.

Without a burn barrel, the police department would incur additional costs of traveling to dispose of certain items outside of Page. Some Phoenix area departments are forced to destroy drugs and other evidence at a mine in the area at a cost of $500 per ton. The savings of not destroying drugs and other hazardous evidence offsite will make up for the initial expense of the burn barrel very quickly.