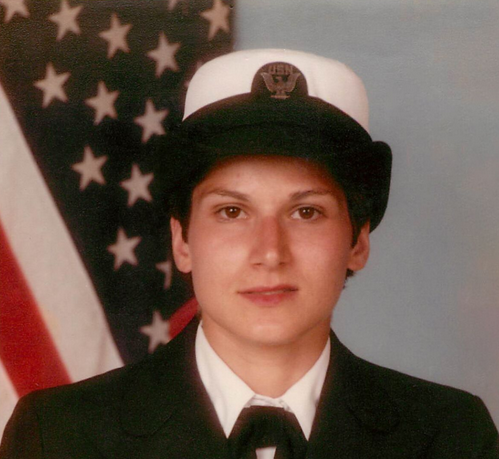 In the summer of 1984, Pamela Cahanes' body was found in an overgrown lot in unincorporated Sanford. The 25-year-old had graduated from boot camp at the Orlando Naval Training Center two days earlier. She had been beaten and strangled. Her white uniform lay inches from her body.

Her killing went unsolved for 34 years.

Garner was arrested Wednesday at his apartment in Jacksonville. He was taken to the Seminole County Jail, where he's being held without bond on a first-degree murder charge.

"It's extremely bizarre to think that somebody could commit a crime like this, then go on and lead a normal life," Lemma said during a press conference announcing Garner's arrest.

For years, authorities had tested the DNA found on Cahanes to no avail. But recent advancements allowed investigators to build a "family tree" that eventually led to Garner being considered a suspect in the case. A spokesman for the Sheriff's Office said Garner's DNA was matched using a "genealogy research database," but did not elaborate on which specific database led authorities to Garner.

Investigators then trailed Garner until he dropped a "personal item" that analysts could test for DNA. Testing later placed the odds of the evidence found on Cahanes' body belonging to anyone other than Garner at 700 billion to one, Lemma said.

Garner had not previously been considered a suspect, Lemma said. Garner has not admitted to killing Cahanes and authorities are not sure how the two encountered each other.

"If you think about his perspective, quite literally he was probably under the belief that he was getting away with murder," Lemma said.

Cahanes grew up on a dairy farm in a large family in Minnesota, the seventh of eight children. She enlisted in the Navy and, in May 1984, flew down to Orlando to attend boot camp at the Orlando Naval Training Center in what is now Baldwin Park.

On Aug. 5, 1984, Cahanes was found face-down in her underwear in the yard of a vacant home on what is now the corner of Riverview Avenue and West First Street in Sanford. She had been beaten and bloodied. But she had not been robbed, and Lemma said it did not appear she had been sexually assaulted.

Retired SCSO Investigator Bob Jaynes worked on Cahanes' case for more than 20 years. He kept a picture of her on his desk and had hoped to solve the case while Cahanes' mother was still alive. But the break came too late. Alice Cahanes died in 2016.

"It is extremely sad to know that our victim's mom had passed away, and never had the opportunity to see this," Lemma said. "I'm convinced she's looking down from heaven right now, knowing this is a day of relief as this person is held accountable and responsible for what he's done."

"Pam was a loving, charming farm girl at heart who wanted to continue to explore by going into the Navy," said her sister, Eileen Bergmann, 69.

"We had no idea this was coming," she said. "We're just in shock right now, but I never gave up hope."

Several siblings gathered at a home in Minnesota, where they heard news of Garner's arrest Thursday morning.