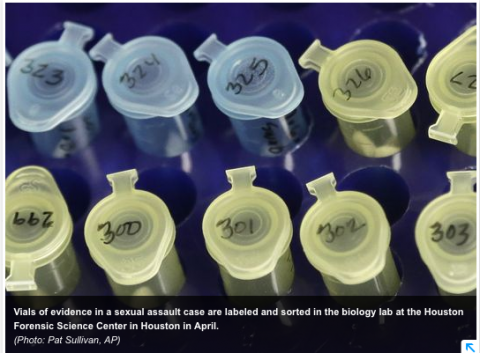 After the kits are tested, the DNA will be entered into the FBI's Combined DNA Index System (CODIS), which will check for hits across the country.

Roberts explained the rationale behind the change in terms of alternative scenarios:

In one instance, a Phoenix woman says she was raped by her boyfriend. Her boyfriend says the sex was consensual, and the case goes nowhere. And because agencies often don't communicate investigative leads, police are unaware that the man has a track record of the same behavior.

In the second scenario, police enter the kit into CODIS.

"So now we see that he did the same thing with a girlfriend in Scottsdale. And guess what, he did it in Eloy and El Mirage," Roberts said. "Now we have a pattern of behavior can we pursue, because he's using the same MO."

Untested rape kits are often dubbed "backlogs," but advocates for uniform testing say the term can be a misnomer. It implies that the kits were intended to be analyzed but were forced into storage by a lack of funding or resources.

Although this is sometimes the case, many agencies across the nation, like the Phoenix Police Department, decided not to test based on the other evidence in the case.

Tens of thousands of untested kits

A joint investigation by The Arizona Republic and other USA Today Network affiliates last year found that more than 800 law-enforcement agencies nationwide were in possession of at least 70,000 untested sexual-assault kits.

Allison Bones, CEO of the Arizona Coalition to End Sexual and Domestic Violence, said advocacy groups have pressed the issue for years, but only recently has it gained a sense of urgency among police and lawmakers.

Phoenix, she said, is among the "first quarter" of agencies to introduce related policy changes. Tempe, Tucson and the Maricopa County Attorney's Office recently received federal grant funding to test their own kits.

The issue has gained traction with federal and local lawmakers as well. In January, Gov. Doug Ducey created a task force dedicated to clearing the state's untested kits. According to the governor's website, there were more than 2,300 in Maricopa County alone.

"There's definitely a movement — you've got a lot of attention on this the last year or so," Bones said. "It's part of a whole surge of cities across the country that are really going to prioritize and really make (testing all kits) an ongoing practice of their city."

In addition to potentially flagging a serial rapist, Bones said the analysis can help comfort victims who undergo the invasive procedure used to create the kits.

"I think there's some level of closure — that something came out of it as opposed to it just sitting on a shelf," she said.

Grants will help pay to catch up

The analysis comes with a price. Each test run by the Phoenix police crime lab costs about $1,000, putting the price tag for untested kits alone at about $1.7 million. And that estimate could be low; Roberts said Phoenix police are still checking inventory for more.

Police say they are relying on a third-party vendor and grant funding to help shoulder the costs. Roberts said Phoenix recently partnered with the New York County District Attorney's Office on a grant, which will cover testing for about 80 percent of the rape kits, or about 1,360 of them.

The department is applying for other grants as well.

Vice Mayor Kate Gallego said, "I repeatedly heard from women's groups and advocates who helped make the testing a local priority. We sat down with the police department and they have separately met with other groups and realized that this was the best decision for the city of Phoenix."

Roberts said the program continues a movement that started several years ago, when Phoenix police introduced a cold-case unit for sexual assaults. The squad, she said, is the reason the department no longer has any untested rape kits for unknown assailants.

Roberts said the move helped track, arrest and ultimately convict previously unknown rapists. She's confident that the recent change will spur cases of its own.

"It's not going to be an astronomical number," she said. "But one case is a success."

Tweet
How do you feel about this post?
Happy (0)
Love (0)
Surprised (0)
Sad (0)
Angry (0)
Tags:
Untested rape kit CODIS backlog
Daniel Edward McDermott to face trial for 1988 col...
Auditors find no log for evidence in Decatur Count...
Comment for this post has been locked by admin.