Smith told investigators he was prescribed morphine and oxycodone for chronic back pain. His dependence on painkillers spiraled into addiction that "knows no boundaries and crosses socioeconomic lines 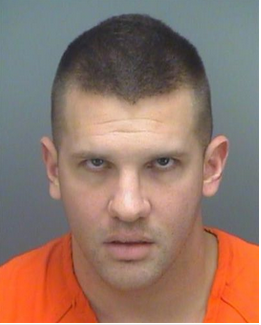 Pinellas County Sheriff Bob Gualtieri said he was a "good deputy" when he was hired in October 2012. But then he started coming in late, missing work and taking too long to file reports.

It came to a head Wednesday when deputies arrested Smith, 32, accused of selling his duty gun to a pawnshop in New Port Richey and stealing drugs that had been brought in to be destroyed.

Smith told investigators he was prescribed morphine and oxycodone for chronic back pain. His dependence on painkillers spiraled into addiction that "knows no boundaries and crosses socioeconomic lines," Gualtieri said at a news conference.

"You've got a guy that has been destroyed because of his addiction,'' he said. "We can't make any mistake that this problem is still here."

Investigators found that Smith stole at least three pill bottles with more than 300 pills, Gual­tieri said. In one case on Sept. 24, two people brought in a bottle of 100 hydrocodone pills prescribed to their deceased sister to the sheriff's Dunedin office. Smith put them in a plastic bag and into the back of his cruiser.

The Sheriff's Office was tipped off by a former girlfriend of Smith's, who reported that he had a prescription drug addiction and had told her he stole the pills, Gualtieri said.

Smith was fired and arrested on Wednesday. When he was asked to turn in his agency-issued equipment, Smith didn't have a Glock 30 .45-caliber pistol. When asked what happened to it, Smith said he sold it to Silver Dollar Pawn in New Port Richey for $250 because he was dealing with financial issues.

Smith faces charges of grand theft and possession of a controlled substance. Deputies booked him into the Pinellas County Jail about 7:45 p.m. Wednesday. He was released about 3 a.m. Thursday after posting $17,000 bail.

Gualtieri said Smith was hired at the Sheriff's Office on Oct. 12, 2012, from the Baker County Sheriff's Office. He was a patrol deputy until September 2013, when he was transferred to the narcotics unit. His issues at work started during his time there.

Smith's personnel file shows several disciplinary issues dating back to May 2013. He was given written counseling after two crashes in his cruiser that were deemed preventable. In one case from April 2014, Smith left his agency-issued shotgun in his cruiser while it was being serviced at a car dealership. In October 2015, he was handed a one-day suspension after failing to appear for an April 2015 deposition and not completing two witness statements.

Smith was transferred back to patrol and moved to the front desk spot, where his duties included taking reports over the phone, answering questions and taking in drugs to be destroyed from residents who bring them in, which Gualtieri said happens daily. "We encourage people to do it," he said. "It should end up in the right hands, not the wrong hands."

In January, Smith's supervisors met with him to find out if there were any personal issues affecting his work life. He told them that his divorce was almost finalized and that a parenting plan was completed. He also said a recent surgery resolved a health issue that made it difficult for him to lean over his laptop and type reports.

He didn't want counseling, he said. He felt his personal issues were almost resolved.