A judge ordered Johnson County last month to pay Helen McCommas $20,169.52 for seven firearms and about 10,000 rounds of ammunition that either disappeared or were destroyed after sheriff's officers seized
them in 2013. 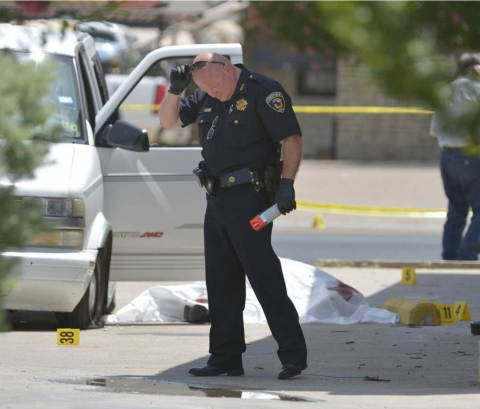 CLEBURNE Issues at the Johnson County Sheriff's Department, which is under investigation by the Texas Rangers, led to a $20,000 payment to the widow of a man who killed a deputy.

A judge ordered Johnson County last month to pay Helen McCommas $20,169.52 for seven firearms and about 10,000 rounds of ammunition that either disappeared or were destroyed after sheriff's officers seized them in 2013.

Judge William Bosworth also ordered the county to return to McCommas more than 20 weapons and about 10,000 rounds of ammunition still in the Sheriff's Department's possession. The county was ordered to pay an additional $9,750 to McCommas' attorneys for legal fees.

At issue in his widow's lawsuit were 28 firearms and about 20,000 rounds of ammunition authorities seized from the McCommas home after the 2013 shootings.

The Texas Rangers and a special prosecutor began investigating the Johnson County Sheriff's Department office after a regularly scheduled county audit in March that revealed 10 weapons and ammunition were missing from the property room and that several weapons had been destroyed. The missing items appeared a few days later, when a county auditor returned to the property room.

Bosworth signed the original search warrant for the items in 2013. Authorities received a separate order about a week later from Justice of the Peace Jeff Monk.

He ordered that the seized weapons be used by the Sheriff's Department or destroyed.

But Monk's court did not have jurisdiction to issue such an order because Bosworth signed the search warrant, Bosworth ruled.

McCommas and her attorney, Keith Bradley, could not be reached for comment this week.

In the audit report this year, auditor J.R. Kirkpatrick wrote that it remained "unclear" why the missing weapons weren't shown to auditors during their initial review of the property room.

"It appears that the Sheriff's Office has acted pursuant to [Justice of the Peace Jeff Monk's] Order, although its validity has been drawn into question," Kirkpatrick wrote in the audit report.

A sheriff's lieutenant told the auditor's office that some of the ammunition "had been dispensed to deputies for training purposes," the report said.

Kirkpatrick outlined other criticisms of the Sheriff's Department in the audit report:

▪ Some personnel were allowed to enter the property room without signing in.

▪ The department failed to execute magistrate orders. Some weapons were found in the property room that should have been destroyed, per Monk's order, Kirkpatrick wrote in the report.

▪ The department failed to maintain an accurate record of property inventory. Sheriff Bob Alford, who is not running for re-election this fall, declined to comment on the situation Tuesday but said he welcomed the investigation.

"I agreed to it," Alford said. "Let's bring in the Rangers; let's take a look at things."

On the day of the shootings in 2013, McLean, 38, had responded to a disturbance call in the Oak Trail Shores community north of Granbury.

Ricky Don McCommas, 49, had gone there to confront a 16-year-old girl he was accused of sexually assaulting, authorities said.

After shooting McLean, McCommas went to Granbury, where he engaged in a shootout with Granbury police near City Hall. He was fatally shot and a Granbury officer, Chad Davis, was wounded.

In a 2013 article on the shooting, Alford told the Star-Telegram he believed that Ricky Don McCommas had a federal license to deal in guns.

A "McCommas Gun Sales" notebook was among items seized from McCommas' home in 2013.

The weapons and ammunition were seized from Helen McCommas after her husband killed Hood County Sgt. Lance McLean in 2013. Some of the weapons and about 10,000 rounds of ammunition were missing from the property room at the Johnson County Sheriff’s Department.
http://www.star-telegram.com/news/state/texas/article107702787.html
Tweet
How do you feel about this post?
Happy (0)
Love (0)
Surprised (0)
Sad (0)
Angry (0)
Pinellas deputy fired, accused of pawning duty gun...
Outside Investigation Begins Into Missing Evidence
Comment for this post has been locked by admin.