Kentucky has shipped 3,173 untested rape kits to a private laboratory in
Utah for forensic analysis, to determine if DNA evidence can be
retrieved. 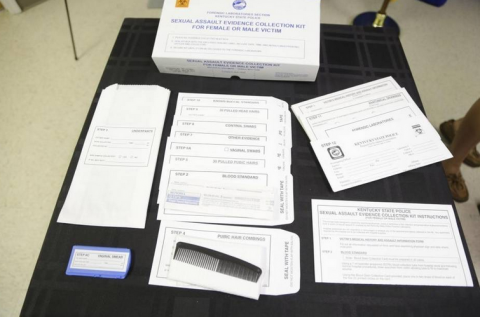 So far, Kentucky has shipped 3,173 untested rape kits to a private laboratory in Utah for forensic analysis, to determine if DNA evidence can be retrieved. Of those kits, 1,469 have been tested, leading to 146 DNA profiles being entered into a national database maintained by the FBI. Those have produced 59 matches to samples already in the database, linking Kentucky assaults to other crimes or even to specific offenders.

No arrests have yet been made using newly retrieved DNA evidence, but police in Lexington and Louisville say they have started to reopen old investigations. This week, Beshear is hosting a three-day conference in Lexington to educate local prosecutors on how they can approach rape survivors and build criminal cases long after the initial investigations were closed.

"It was a national shame" when many states discovered piles of untested rape kits gathering dust in police custody, Beshear told the dozens of prosecutors who gathered on Monday. (In Kentucky, a 2015 state audit uncovered 3,090 untested rape kits. More recent estimates put the total closer to 3,800.)

"You all, in your jobs, know those aren't just boxes on a shelf," Beshear told the prosecutors.

"Each one represents the victim of a horrific crime who had the courage to report an under-reported crime," Beshear said. "And then they had the courage to undergo what each of you knows is one of the most invasive forensic exams that we can ever ask anyone to undergo. And what did we do in so many of those cases? We locked that courage — for whatever reason — in that box and we put it on a shelf."

Speaking at the conference, police detectives explained that it sometimes is difficult to locate survivors so many years after they reported an assault to tell them that DNA evidence has been recovered. People move or change names, or even die. Still, Kentucky now requires that rape survivors be informed whenever possible about the current status of the kits from their cases, the detectives said.

Under Senate Bill 63, which the legislature passed last year, the state police lab must process rape kits for police departments more quickly, with an average turnaround time of 90 days required by next year and 60 days by 2020. The 2015 state audit found average wait times of eight months were not unusual for rape kit analysis.

In some major cities that are tackling rape kit backlogs, including Los Angeles, Detroit and Houston, analysts are finding matches to the national DNA database for more than 20 percent of the submitted kits, a University of Louisville researcher told the conference on Monday.

Getting a match, or a "hit," that links DNA from an old case to the national database is just the start of the process, police said. A "forensic hit" means the DNA matches samples submitted from one or more crime scenes elsewhere, which can be a useful clue, but it does not solve the case. An "offender hit" means the DNA can be linked to a specific offender whose DNA is on file, letting police zero in on a particular suspect.

As of this week, Lexington police say previously untested rape kits from their old cases have produced four matches with the national DNA database, although only one of those has provided detectives with new information they can use to pursue a criminal investigation.

"I was told by the lab that we can expect hits in about 35 percent of the cases," Red Corn said. "I think results are going to come in slow and steady. I anticipate that some of these cases are going to go forward. But as for what the exact number or percentage will be for us, I just don't know yet."

Beshear told the prosecutors that the cases soon to be reopened by old rape kits could be "the most important to ever cross your desks." Nearly half of Kentucky women "are subjected to some form of sexual violence in their lifetime," but only 3 percent of sexual assaults result in a criminal conviction, he said.

"These predators know that there is not a high likelihood right now that they are going to be thrown in jail," Beshear said. "I think all of us want to change that."

Kentucky prosecutors must prepare for a wave of newly reopened sexual assault cases as several thousand previously untested rape kits — some dating back to the 1970s — begin to yield crucial DNA evidence, Attorney General Andy Beshear said this week.
http://www.kentucky.com/news/politics-government/article144205954.html
Tweet
How do you feel about this post?
Happy (0)
Love (0)
Surprised (0)
Sad (0)
Angry (0)
Tags:
altered evidence assault  kits Chain of Custody Big Three:
Massachusetts Supreme Judicial Court to Vacate 21,...
Ex-cop accused of evidence locker theft was back i...
Comment for this post has been locked by admin.