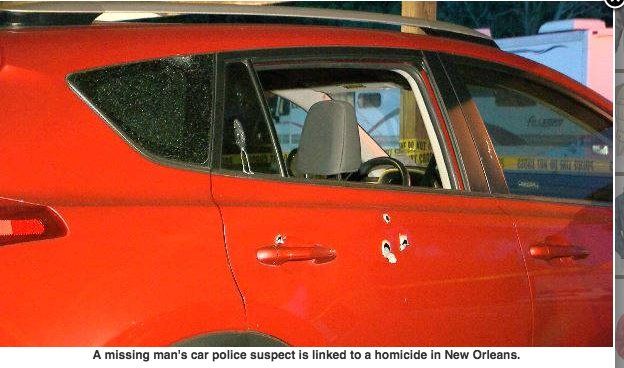 A missing man's vehicle found after a murder in the Milan neighborhood could hold evidence for New Orleans police detectives.

New Orleans police found Gerald Oster Jr.'s SUV last Wednesday. It was found riddled with bullets after a shooting near the corner of Freret and Peniston.

Oster went missing on March 18 and was found dead four days later, but he wasn't identified to family members until this weekend.

"You would've thought they would have put it in a cage, and it's just miscommunication all the way around," Jennings said. "And I know NOPD is busy and Fifth District is always backlogged, but you know sometimes we have to sit on them, and it was a call and maybe it was a bad call, but luckily I was able to preserve it."

Jennings said once he saw the car, he knew it should be preserved because it was riddled with bullet holes that appeared to come from inside the vehicle, and it was clear it was involved in a crime in New Orleans.

He said New Orleans detectives came to his department on Friday to take a look at the car and began to look further into the evidence, including shell casings inside the vehicle and the multiple bullet holes in the side of the car.

"We found out from homicide that came back out to look at the car again that this car was probably used in a drive-by shooting or a murder from Wednesday when the car was found. So good thing I preserved the evidence and had it moved to our Police Department to preserve it because if not, it would've been parked in the lot or a body shop or something, and we would've lost all the evidence that we're going to need for this case," Jennings said.

Jennings said when he first learned of Oster's car, the missing man hadn't been identified, so he couldn't be sure he wasn't involved. But Jennings said either way, it was clear a crime occurred in New Orleans and the car should never have been sent across the lake.

He said after police connected it to the Freret Street shooting, he knew his initial intuition was likely spot on after identifying the multiple bullet holes seemingly originating from inside the SUV.

"My hunch was it was a drive-by. The guy was driving, he leaned back in his seat and fired like this as he was driving by somebody, and that's still what I think to this day. Looking at the bullet holes and the way they exit the car, and that's truly what I think. The car was bumpy, he shot up inside the car, quite a bit of those 12 casings they found Saturday from the crime lab," Jennings said.

Jennings said he's working in concert with Chief Michael Harrison and the New Orleans Police Department, and he expects detectives to return to collect additional evidence from the vehicle.

The New Orleans Police Department would only confirm that Oster's RAV-4, which is now in Pearl River, is connected to the Freret Street shooting.