Queens man, 80, is arrested over cold-case killings of two 19-year-old women who were strangled and shot in Virginia Beach 44 years ago

A police source familiar with the investigation revealed to DailyMail.com that the case involved DNA evidence 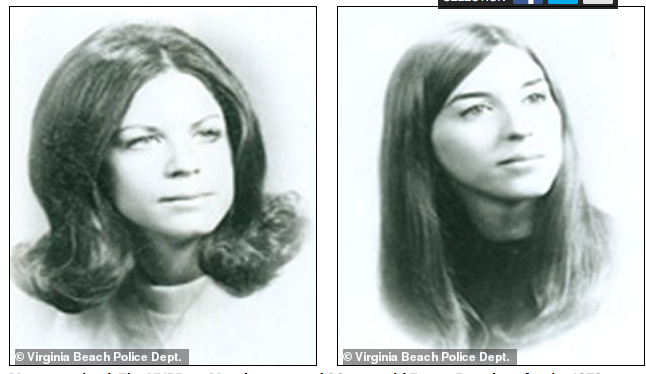 Police in New York City have arrested an 80-year-old man in connection with the brutal 1973 murders of two 19-year-old women in Virginia Beach.

Ernest Broadnax, an ex-convict with a lengthy criminal record, was taken into custody on Monday afternoon in Queens by the NYPD's Cold Case Apprehension Squad.

Broadnax is facing murder and rape charges in Virginia over the deaths of Lynn Seethaler and Janice Pietropaola, both from Pittsburgh.

The pair had been vacationing at the Virginia Beach Oceanfront in June 1973 when they were found dead in a motel cottage. Broadnax was 33 years old at the time.

Pietropaola was raped, strangled and shot three times. Seethaler was strangled, shot twice in the head and had her throat cut with a broken wine bottle.

A worker at Farrar's Tourist Village found the women's bodies after they missed their checkout time at the end of a five-day stay, reported The Virginian Pilot.

Pietropaola and Seethaler's bodies were described by local police as 'partially clad' and one of them was naked from the waist down.

The attacker was believed to have entered the cottage by removing a window screen and climbing inside.

The cottage where the double homicide occurred has since been destroyed and replaced with new motels and shops.

In 2011, Virginia Beach detectives told the station WTRK they suspected the person who murdered Pietropaola and Seethaler had slain as many as 10 women, all of them between the ages of 18 and 25, in the area in the 1970s and early 1980s.

Broadnax is being held in a New York City jail pending his extradition back to Virginia, where he will be charged with two counts of second-degree murder and one count of rape.

So far, the 80-year-old resident of Hollis, Queens, has not been linked to the other cold-case killings and disappearances of young women in Virginia Beach.

Police have not said exactly how they managed to track the suspect down after 45 years. An NYPD spokesperson on Tuesday attributed Broadnax's arrest to 'good police work.'

However, a police source familiar with the investigation revealed to DailyMail.com that the case involved DNA evidence.

Virginia Beach police spokesperson Linda Kuehn said in a statement that in the fall of 2018, the agency's cold-case investigators 'began aggressively researching a strong lead they had received in the case,' which ultimately led to Broadnax's arrest this week.

Records indicate that Broadnax has been in and out of jail in New York City since 1990. His past criminal history includes 10 arrests on charges of assault, burglary and trespassing.

He was most recently released from prison in 2013 after serving eight years on an assault conviction.

Until his arrest on Monday, Broadnax had been living in an affordable housing facility for military veterans.

His neighbor Kevin Wallace told the New York Daily News that arresting officers offered Broadnax a bottle of water, helped him put on some clothes and led him away without restraining his hands.

'He went very quietly,' Wallace said. 'He knew he did it. They couldn't find him, and all the sudden they found him.'

Wallace, 60, described the suspected murderer as a very quiet man who kept to himself.