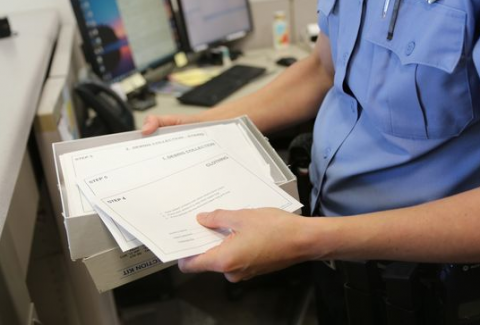 Some advocates for sexual assault victims are praising Utah's new legislation regarding the processing of rape kits.

Gov. Gary Herbert signed House Bill 200 on March 22, which now requires local law enforcement agencies to submit sexual assault kits to state forensic labs for testing within 30 days of retrieval. The bill also requires a tracking system, statewide, for all rape kits, which the victim of the assault can anonymously track as it's being evaluated and tested.

Herbert appropriated $1.2 million to fund these reforms in an effort to cut through the backlog of an estimated 2,700 untested kits across the state and to stay current with newly submitted kits. However, that dollar amount is only half of what the bill's chief sponsor, Rep. Angela Romero (D), had initially requested.

Moving forward, some question if the funding is enough to help eliminate the backlog and also test incoming kits in a timely manner since it can cost up to $1,500 to test just one kit.

A 2015 study from Brigham Young University suggests Washington County ranks last in the state for total rape kit submissions. Washington County only submitted about 18 percent of its rape kits to its lab, while Salt Lake and Iron Counties sent about 40 percent.

n 2012, the St. George Police Department recommended an agency-wide practice regarding sexual assault kits that requires officers to submit them to the forensic lab within one week of retrieval.

WCPD Officer Ed Kantor said every case is a bit different, which is why it does not lend itself well to a specific one-size-fits-all policy.

"There's no time period," Kantor said. "It's submitted to the state as soon as possible, but there's usually no delay unless it's something beyond our control."

According to Kantor, WCPD submitted six kits they received from January 2016 until March 2017 to the state crime lab for testing, five of which are still pending.

As for CCPD, Sgt. Jerry Womack also said the time that goes by between when the kit is retrieved to when it is sent for forensic testing is determined on a case-by-case basis. He said most of the department's rape cases aren't "stranger rapes" where the victim doesn't know who the suspect is, which means the "timeliness of the rape kit wasn't as important."

However, according to the Rape Abuse and Incest National Network, prosecutors can use the results from rape kits — which provide physical evidence the sex crime took place — to file charges against a suspect and form more solid cases and avoid the "he-said-she-said" barrier they often face when prosecuting sex crimes.

"Moving forward, we're going to do what we're required to do through state law and cooperate with that and get those sent off and get in compliance with state law," Womack said. "Honestly, they're going to be pretty overwhelmed at the crime lab for awhile with everyone sending their kits in."

According to the SGPD, the department processed 25 kits in 2016, and, according to SGPD Officer Lona Trombley, there is not a backlog of kits waiting to be tested.

For the majority of the time, Trombley said sexual assault kits are submitted within the policy's week time frame, but some circumstances may push that out to two weeks, she said.

"The thing is that our department works very hard to stay updated if not ahead of what is happening with bills that are being signed," Trombley said. "As soon as our officers pick up the kit, they book it into evidence."

SGPD has already been trying to get sexual assault kits processed as quick as they can, Trombley said.

A USA Today investigation in 2015 found that there were more than 70,000 untested sexual assault kits sitting in evidence rooms across the country. Since the investigation, more than 20 states moved forward with reforms regarding how law enforcement agencies handle rape kits.

During the 2017 legislative session, Romero and rape survivors provided emotional testimony to lawmakers in an effort to push the bill forward. The bill was eventually passed unanimously.Romero said one Utah rape kit had been waiting to be tested since 1988.

According to the Utah Department of Health, 1 in 3 Utah women will be sexually assaulted within her lifetime. In addition, the state reported the rate of rape in Utah increased 17.5 percent since 2013.